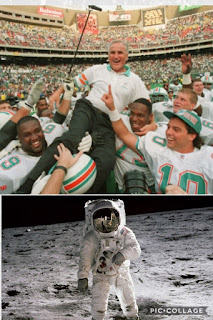 In honor of the 1969 moon landing, and the persistent (yet ludicrous) claims that it's a hoax, I decided to create my own conspiracy theory:

The 1972 Miami Dolphins perfect season is a hoax. It never happened. It's fake news!

I mean a guy with glasses comes on and miraculously leads his team?! A bunch of no name guys playing top-notch defense?! It's impossible!

The "season" was played out on a soundstage in California. Ed Sabol, Director of nfl films was brought in to make it look real! Those miraculous plays we see were to make it more compelling. And the blunder by Garo Yepremian in the super bowl was a joke inserted to make us really believe it.

Just look at the hilights. Why is there no actual game film?! Because it was faked!

—- now, see how stupid this sounds?