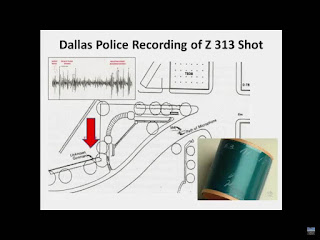 As I've mentioned before, there is a lot of confusion/uncertainty about the assassination.

So many dots that can't be connected. So many things that don't make sense.

Was Oswald even involved?  If he or someone took the shot from the school book depository, why not take an easier shot as the limo approached, rather than firing from behind? What of all the questions about the rifle and its caliber? Why was officer Tippet killed? Was it connected in some way? After all, people say he looked like JFK.

In many ways, we have to go back to the beginning.  What do we actually *know* and what is mere speculation? Or perhaps what are misreported "facts" from news organizations and investigators who were scrambling to understand everything for the first 24-48 hours?

A reader sent me a link to this video that I found to be most enlightening. The person speaking refers to it as how he contributed to some of the confusion by a simple mistake he made. It's worth a look, because it changes the conversation.

As I've stated, we'll never know the truth, but maybe we can set aside the warren commission findings, and take a fresh look at all the facts.  Put away all the conspiracy theories and just focus on what we know....