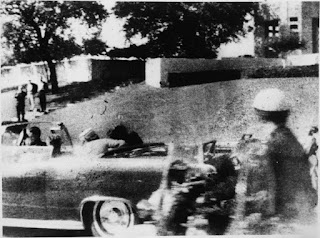 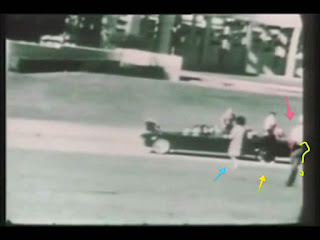 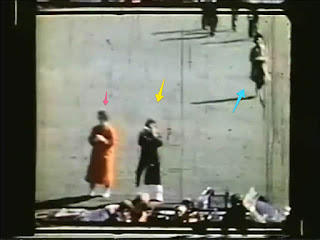 Some things just clatter around in your brain for a while. Here's one about the jfk assassination that bugged me,  Mary Moorman is the person I point to with the yellow arrow. She took the lone photo of the assassination that we have.

She said she was standing on the street as the president passed by, in order to get a better look. But in the zapruder film (the one where she and her friend in red are facing the camera), she is clearly NOT on the street. But there's another problem: other things don't quite line up to the photo.

The still I took from the zapruder film is from about 15 frames before the head wound, so you can see her position. The police are in a different enough position where they couldn't make up the distance in the few seconds that pass.

And then there is the photo from behind Moorman. In this picture, she is in the right place with respect to the police, and IS on the street. But now there's the problem of other things, especially the other lady to the side, and the mystery man who isn't in the zapruder picture. I used arrows to show you everyone.

Sure, it could all be timing or angles. And again with crappy photos from the 1960s it's hard to get an accurate true depiction of what happened.

But it goes back to my thought that this is all very, very odd and confusing.