#NotOurPresident - the Donald was right the election was rigged. 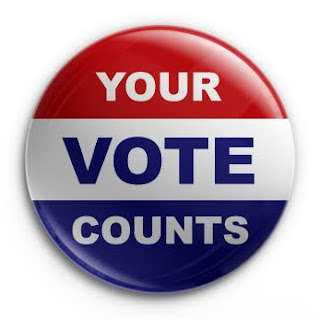 Regarding the button shown in the picture, yeah, maybe it counted and then again, maybe not. Or perhaps it didn't count as much as the Russian votes.
It seems clear some malfeasance went on, and "free and fair" can no longer be applied to this election.  Where this goes from here, I have no earthly clue.  But the outcome can not stand. And can you imagine the outrage if Clinton had won and this came out?  Unhinged probably doesn't begin to describe it, I would think.

Full disclosure: I think trump is a total douche. I think he's unfit to be president. But this has nothing whatsoever to do with personal opinion. This has everything to do with democracy, about the core of our system of government.  We must not accept this.
Putin set out to disrupt our democracy, and it appears as though he succeeded. Either he gets the puppet he wanted as president, or he creates confusion and uncertainty, and perhaps a sort of vacancy in the oval office for period of time...in which case he can go ahead and accomplish whatever he has on his agenda for a while.
The fact that this was known by at least a few people is hugely problematic. You could argue that they were trying to act in the best interests of their party, but I don't buy it,  their actions were treasonous.  Mitch McConnell, I'm looking at you.  And James Comey, perhaps you too.

As for el donaldo, I could not, for the life of me, figure out how he won.  Yeah, he got the fringe people fired up, and winning the primary was a possibility, but it still seemed he should have been weeded out.  In the general election, it just made no sense. The math didn't work for me, and the fact that so many people got it so wrong just bothered me.  And the notion that there were any (much less 10s of thousands) of "hidden trump supporters" didn't feel right.  His fans were passionate and vocal.  Why would so many of them hide in anonymous surveys?

Free and fair election.  That rattled around in my head. If someone were going to tamper with an election, how would they do it?  Perhaps they would do it in many states, to ensure that any one state mixup or recount wouldn't change anything. Perhaps they would select states with large numbers of electoral votes, but whose recount rules were archaic or convoluted. And the simple answer is to have it appear as a couple of smaller, very local problems like a couple of overvotes in some more red districts. Of course you need to ensure that the person you're helping can deflect attention - And he's a master at that.

I never saw election fraud on a grand scale as a real threat.  But I had heard a few security types talk about it before the election, as they often do.  But I discounted it, as I often do.  Maybe this time we should have listened.

For the month, I was a little despondent.  It was about the guy who apparently won, but yet it wasn't about that.  It's hard to describe, but It was about this nagging feeling that it didn't seem right. That something was amiss.  I felt like my intelligence is being assaulted both from the inability to understand what happened, and the continued nonsense being spewed by that same guy.  I did a little homework, and knew there were some theories but nothing concrete as to how he managed to pull out a win.  It's just so weird, because he didn't just eek out a win, either. But this was one mystery I thought might only be solved in time.  I figured it would always be whispers and suggestions.  And as a rational person this bugged the bejezus out of me.  We live in a society that is free.  Intelligent (Well, relatively). And has crowd sourcing and computing. And still no one had anything meaningful. Just observations.
But now the CIA has shared enough details that we know there was some kind of tampering.  The FBI had similar results, but their rationale and the depth of finding was different. But remember who heads the FBI: Comey.  The guy had no business interfering a week before the election, and yet he did for no good reason....unless he had a reason of course.
On the one hand, I feel vindicated that at least I was right in my thinking that it wasn't free and fair. It was exactly as he said it himself. Rigged. I guess you might say that those "hidden trump supporters" were actually Russians.

And that's all fine and well, and I'm suddenly feeling energized....but that and 50 cents will get me coffee....the obvious question is: now what?

Can we get out of our own way, and remove the partisanship and look at the real threat to democracy, and do something about all of this?
Perhaps we start by removing and rebuking a few elected and appointed officials.  Determine how much the Donald was involved. Then we proceed to hold a new election, and in the meantime, we roll down the pecking order and hav someone assume office on January 20th.