November 12, 2016
And the Donald is the grand Nagus.
Ferenginar is the Star Trek created world that is motivated by profit.  Their leader is the Nagus, who helps guide them to profitability.
All Ferengi live by a series of "Rules of Acquisition."  On the show, they'd sprinkle them in from time to time, mostly via a character named Quark, who ran a bar and was quite the nefarious one.
Here are a few of those rules that the Donald may use in his everyday life:

"Once you have their money you never give it back."

"A woman wearing clothes is like a man in the kitchen."

"Nothing is more important than your health...except for your money."

"There are many paths to profit."

"Trust is the biggest liability of all."

"When it's good for business, tell the truth."

"Everything is for sale - even friendship."

"There's nothing wrong with charity... as long as it winds up in your pocket."

"Sell the sizzle, not the steak."

"A good lie is easier to believe than the truth."

"A wife is [a] luxury... a smart accountant a neccessity."

"A man is only worth the sum of his possessions."

And of course, the Donald looks suspiciously like the Nagus. Well except maybe the ears. No umax for him! 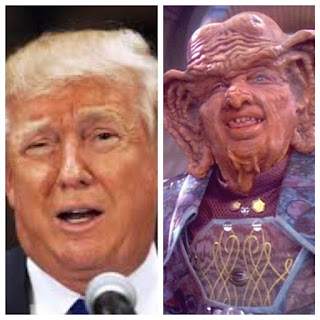