September 04, 2017
Setting aside whether you understand or believe in climate science, there is some basic science that is used to forecast hurricanes. I'll get to that in a moment.  But first, we have to understand that because of the general category of "politics" the National Weather Service is limited to some degree in its ability to accurately and reliably predict storms.
As it happens, both the UK's Metrological group and a European weather group do a better job of tracking and predicting storms.  When you read up on the subject, you find that they put money into predictive tools, computers, satellites, and take CLIMATE SCIENCE seriously.  And over the years, their predictions have gotten better, since they appreciate the basis for hurricanes and climate-related patterns.
Now back to the hurricane predictions themselves.  There are many factors that impact storms.  Some of the more basic ones are: depth and temperature of water, surface conditions (such as barometric pressure), and other storms that may influence intensity or direction. There are other factors, of course, but that kind of gets it going.  And as an aside, the warmest waters and lowest barometric tend to be in the Florida straights (i.e., between Cuba and Key West), so all things being equal, that is the path a storm would take with no other influences.
The speed of the storm, and wind intensity are used to create a basis for the model along with these factors.  And many groups run their forecasting model against all of these variables and come up with a forecast.
And the Hurricane Hunter planes head into the storm to get accurate readings.  Yep, the coast guard sends planes into the storms to get readings on all of the factors in real time to share in order to formulate a prediction.
When all of these are aggregated together, they establish the bounds for where the storms will go.  For the 12-hour window, they mostly converge, so you have a small cone of movement, but as you move out 24-120 hours, this cone expansion significantly, because each of the model interprets data differently.
And because storms are moving 10-15 MPH typically, this makes sense.  It takes them time to cover large distances, and things can and do change in that 5-day window.
When you look at the map for Irma, the US-based models show it on a more northward path in the 5-day window.  The UK-based model has it near the center. And the European model has it further south over Cuba.  Historically, since the latter two have shown a higher accuracy its likely it will track further south.
But there are no guarantees, and we all have to remain aware and vigilant, and make storm preparation accordingly.
And here's the thing: we, as an affluent nation, should really take a hard look at our ability to predict storms. Since we bear the brunt of hurricanes, why is it that scientists across the pond can make better predictions that we can?  How does that make sense?  And we continue to try and chip away at climate science as a bad thing.  Wouldn't it be nice if we could predict - with some accuracy - where a storm will hit and how intense it might be?  In some cases, it may allow us to properly plan to open levees and dykes to move water.  In others, it might help with evacuation, or staging for quickly getting back to normal.
The modeling isn't all that hard.  The technology to do it well exists. We have bright people who want to do it.  We just need to take it seriously. 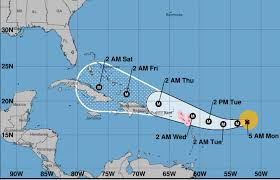