What did we learn? Hurricane edition 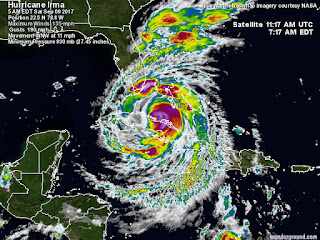 Irma was noted to be the biggest storm ever recorded in the Atlantic. That was an "oh shit" moment if there ever was one. And it caused a lot of damage on the islands, which is quite sad and devastating to the places affected.

As a native to Florida, I consider myself a sort of amateur meteorologist. I was studying the storm, and thought it would go through the keys and up the west coast of Florida. But the models were saying it would probably be on the east coast, which was odd, but I'm not going to risk my life on intuition, so I prepared based on what the models said.

I caught a little local news and they were talking about the dangers and honestly they managed to scare me a little. But I was still preparing the same way. Then I watched some national news, after people from out of state called to see if I was evacuating. Oh my god. The national news was practically screaming "you're all going to die!" It didn't help that the governor misspoke and said everyone should evacuate Florida, when he meant people should evacuate low lying areas and go to a shelter.

I understand that they are trying to get people motivated to act. But that's a little over the top. And then there was a little douchebag of a radio host *cough* *rush* *cough* who was telling people the storm was a liberal conspiracy, which helps no one. And then he left his home in palm beach to flee, which shows what he's made of - he's spinning a storm as political to fit his whacked narrative.

Now to the main focus of what we learned. The forecasting models were very unclear at 5 days out. The storm was huge, and the entire state of Florida was in its path. Understanding the weather is tricky, and there are many variables. Surely forecasting has come a long way in 25 years, but it's still lacking in some ways. We have the technology and the ability to model and understand. If only we would spend more time and energy working on it. And then there's the money factor. They approved $15 billion in aid for Harvey, and undoubtedly will approve some for Florida, and other us territories for Irma and then for Jose. Plus the cost of sending in the national guard, search and rescue, the navy helping, etc.

Climate science is a real thing, and we need to take it seriously. Surely there is change in climate, since the industrial revolution. We can debate about the extent, and whether man has caused or accelerated it. But it's happening. Let's seek to invest in it and understand it. That's our best hope for the future.

Now, in looking over the history for both the European and U.K. Models I mentioned previously, they both showed a more westerly path throughout the 5 days, so I would argue they were more accurate. Perfect? Hardly. But better.

One last thing I'd like to mention is running from the storm. Years ago, there was a storm headed for Florida, and my mom wanted to leave. So we did, headed from south Florida up the coast. We wound up in Orlando which seemed safe. Except that the storm turned and hit us there, while leaving our homes in the south untouched.

For Irma, many people I know went to Tampa and Orlando, and a few went further north. And now the storm is bearing down on them as they sit in hotels.

This is the problem with forecasting and deciding to run - there's not enough information to go on, and people make relatively informed decisions based on their fight or flight instinct and listening to weather reports from breathless anchors.

We can do better. De-politicize climate science. Focus on doing better for society. Invest in infrastructure, and weather forecasting. See if there any ways to combat hurricanes, because there might be.