Vote no on trumpcare

Please vote NO on the healthcare bill. It will destroy services for disabled children and adults. Please do the right thing again and stop it. I read the following in the newspaper. It "violates the precept of 'first do no harm'" and "would result in millions of Americans losing their health insurance coverage." – American Medical Association, which represents doctors.

It is "the worst healthcare bill yet." – American Nurses Association.

It "would erode key protections for patients and consumers." – American Hospital Association.

The "process [in the Senate] is just as bad as the substance. ... Most Americans wouldn't buy a used car with this little info." – AARP.

The bill will "weaken access to the care Americans need and deserve." – American Heart Association, jointly with the American Cancer Society Cancer Action Network, the American Diabetes and Lung associations, the Cystic Fibrosis Foundation, the March of Dimes and others.

"This bill harms our most vulnerable patients." – American Psychiatric Association.

It would hurt "consumers and patients by further destabilizing the individual market; cutting Medicaid; pulling back on protections for pre-existing conditions." – America's Health Insurance Plans.

It "would lead to a loss of health insurance for at least 32 million people after 2026. ... By repealing the ACA's coverage expansions and cutting deeply into the Medicaid program, the Graham-Cassidy bill threatens the health care of as many as 100 million people, from newborns to the elderly." – Sara Collins, The Commonwealth Fund. 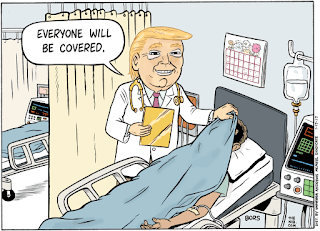