An open letter to Marco Rubio on gun control

February 15, 2018
Early yesterday, you sent out another absurd plea for money.  But in it, you did make one point - that we need to make this nation a better place for our children and grandchildren.  And why did that resonate so much?  Because, of course, later in the day OUR children were senselessly slaughtered by a kid who had an assault rifle.  We still don't know the full extent of this mass murder, but we do know that parents sent their kids off to school, and they will never see them again.

And why? Because politicians like you seem to think its okay for everyone to have an assault rifle.  Assault.  It says what it is, and what its used for right in the name.  How can there be any debate that these weapons are used for anything other than killing other humans?

Its absurd that you, and others like you, take money from the NRA and other groups to promote the gun culture.  And that you stand there and say we need more border security, or immigration reform because the boogey man might come and get us from across the seas.

No this is a problem of our own making.  We need to address the problem of home grown terrorism.  Of people who want to harm fellow Americans.  To harm our children.

We need to make this country a safer place for our kids and grandkids.  We can't let these monsters win, and throw up our hands and say "nothing we can do, sorry second amendment."  And then offer up stupid talking points and thoughts and prayers for those who were massacred.  Stop using pejorative terms to describe these acts of violence.

It needs to stop. And it needs to stop now.  More mental services.  Some sensible legislation.  Don't tell me there's nothing you can do.  That's total garbage.  While this one may not have directly impacted you, it surely impacted someone you know - since Parkland is part of South Florida. 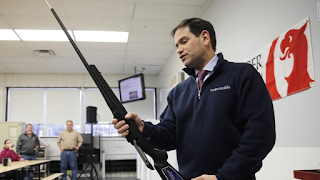