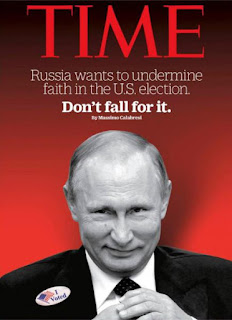 The indictments handed down from the grand jury via the mueller investigation were interesting. In short, 13 Russian nationals and 3 Russian businesses, and one American were implicated in a plot to sow discord and influence the election.

Rosentsteins reading of the indictments was also interesting, because his words were measured and talked about *this* indictment, specifically.

A couple of quick thoughts:
* it was made clear that this was an effort to promote trump, and denigrate any opponent.
* in an effort to continually help trump, stein was promoted
* to further sow discord, there were rallies to both promote and oppose trump
* money changed hands to fund this effort

And that's where the one "common criminal" from the US comes in. This guy was facilitating the money transfers, setting up accounts, committing fraud against the banking industry. Was he a witting accomplice, or simply just making a buck? We don't know, and it kind of doesn't matter.

But he did help make this happen, and has already agreed to a plea deal...which also would lead one to believe there's more.

This, in and of itself, is not an indicator of collusion with the trump campaign. But it's weird how trump and his allies immediately seized on this to say they were vindicated. Which they were not.

There's a distinction between being exonerated or the evidence being exculpatory (meaning it favors the accused), and saying that this indictment in and of itself doesn't show collusion. It may sound the same, or at least similar, but words have a legal meaning.

Trump himself says that because this started in 2014, before he "decided to run," it means nothing. Except that there are tweets to and from trump that say he might run as early as 2012; and some from Russian nationals that are more specific in 2014. Oh, and by the way, trump trademarked "make America great again" in 2012. Seems that an astute lawyer could use that against him.

And then, I went down the rabbit hole. I decided to read more about all of this. I did discover that one thing most people can agree on is that mueller and team aren't done.

On the one hand, you have some liberal-leaning folks looking at the connections between trump and Russia which are essentially unrelated to this. Like Rybolovlev, one particular oligarch, who purchased property from trump way over market value, and who just happened to follow trump around during the campaign (and after) according to his flight logs. Or a host of others who invested in or were connected "as friends" to the trump family that seem to be more like business partners.

Naturally, most of them think trump will ultimately be swept up in this, and mueller is just building a case.

On the right-leaning side, the view is different. Vast conspiracy theories with "deep state" and a corrupt fbi component. They look back to Hillary and her ties to Russia as Secretary of State, and the uranium deal, along with donations to her charity....I read more than one post where they see it as Hillary having colluded with Russia, but it went awry because trump was just that awesome!

And for some, it will be Hillary who will be swept up in the probe because she was behind it all. And Obama too, because he was aware of it and complicit or did nothing....or....something.

As far as the election, the indictment points out that a part of the effort was to reach undecided voters and sway them to cast their vote for Jill Stein. And if you look at the vote totals in some of the "surprise" states that trump won, you see that he did win by around the same number of votes as the Stein voters. Coincidence? Could be. Or this could be an indicator of something.

As they say "if you want to get to the truth, follow the money" which seems to be exactly what mueller is doing.