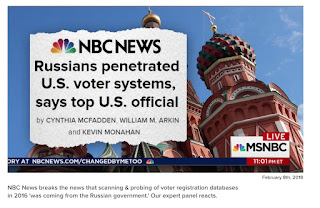 The ONLY thing that should matter to our democracy at this point is this: free and fair elections are the foundation of democracy. The 2016 election was hacked, and in addition to "influencing," the Russian government actually did manage to enter the voting databases - and the assertion is that it probably went further, though we have not heard that piece specifically from the intelligence community.

But even penetrating the voter rolls should be taken seriously. Our democracy was attacked by a foreign power, and those who can do something about it are either turning a ridiculous blind eye to it, or actively looking to discredit information.

Which means that - and we have supporting evidence that this is true in the form of donations coming from Russia - many of them are complicit in the attempt to dismantle our democracy. They are subverting the very constitution they have sworn to defend for personal gain. That is the very definition of treason.

And then there are the dunderheads among the public who seem to think this is all bullshit, and decide that "the snowflakes"simply can't accept that trump won.

If he won in a free and fair election, I may not like it, but I could accept that he was president. But he did not, and that's why I can not accept it.

Every day there is another piece of evidence that mounts that this is all built on treachery and hacking votes. Something must be done.