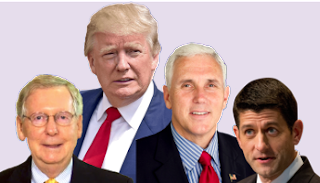 What's happening *is* about el Donaldo and his potential crimes - obstructing justice, violating the emoluments clause, hiring people that are unfit (like his daughter and son in law), handing over classified documents, etc.

But it's about much more. We still have the collusion with Russia item to deal with. And the very real prospect that Russia actively interfered with our election. And here's where things could get really tricky and very interesting.

Mitch McConnell (the turtle) has gone on record to say that he's not in favor of any looking into trump because it will interfere wit the senates legislative agenda. Yet that didn't stop him from shutting it all down when the last guy was there. He was more than happy to not do anything and pout because he couldn't have his way.

And then I saw he made a curious comment about this maybe leading to a special election. I can't find a link to that, but assuming it was, in fact him who said it, why make such a curious comment? Unless you think there's a chance the administration will be impeached.

Eddie Munster (Ryan) is an odd case. He just jumped into trumps pocket and is a yes man. I'm supposing it's because the report of trump donating heavily to Ryan's campaign makes them connected. And of course, Ryan is a tool that looks at his agenda and sees an opportunity to get what he wants in exchange for whatever the orange man wants. Because it's politically expedient to make a deal with the devil to push through what you want, and couldn't have for a few years under the last guy.

And here's one more nugget: don't forget that GOP leadership - specifically McConnell and Ryan - were given a classified briefing by the CIA, FBI and others last year about the potential links between trump and Russia. And they decided not to act on it, saying they'd claim it was partisan to get Hillary elected if it came out.

At that moment, they effectively implicated themselves, or perhaps opened themselves up to an ethics charge, or maybe an obstruction charge. That remains to be seen, but they did take a risk to get the outcome they wanted. And surely there could be consequences for them if the administration were brought down. So it is - regardless of what they do now - in their best interest to slow this moving train down if they can, lest they get hit too.

Now as for trump, clearly there's some nefarious business going on. Yes, you can argue he's a businessman, but it's amazing how many times russia comes up, and how his business ties are all just this side of sketchy. You get a lot of "yeah it's not illegal, but..."
How do any of us know whether he's a good or bad business man? He filed for bankruptcy protection several times in his career. I don't know of many (supposed) billionaires who have done that once, let alone more than once. It's just strange.

So let's suppose Russia is backing him in some way, or that Putin was involved in the election. Even if it's as simple as Russians trying to target voters to manipulate the outcome with alternate facts, shouldn't that be enough to undermine the credibility, the integrity of the election? Suppose I told you that Hillary won under that circumstance, or worse Obama. Wouldn't trumps base be indignant?

And what if it was worse the propaganda? Wouldn't you really wonder?

Even if it was the influence scenario, that would mean the whole election was flawed, and it wouldn't be a "simple" matter of removing trump, because he and pence one as a ticket. And it would mean that pence should also be subject to removal.

Plus, of course, pence appears to be complicit in much of this. He knew about Flynn. He knew about Russia. So if charges were to brought against trump for impeachment on some of the other charges, he would be culpable too.

And that brings us back to Ryan. He's third in line of succession. If he interfered or was involved, he would be unable to serve.

And next in succession is the president of the senate pro tempore, one Orrin Hatch. He's from Utah, is 83 years old, and has been serving in the senate for 40 years. He did run for president once, back in 2000.

If he were to choose not to serve, then we run through secretaries that trump appointed. Some of them worked on his campaign, or had ties to it, so you have to wonder if they would be eligible if the administration were removed.

And in the need, there would probably be a call for a special election so the person serving in that place would have limited time to do much, and would be regarded by both houses as a stop-gap. Maybe they get some of what they want, but you still have to deal with the reality that you can't just blame them for everything since they just assumed the post.
at May 18, 2017 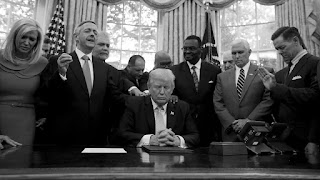