Since @marcorubio won't hold a town hall, here's a message for him 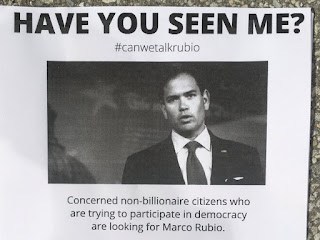 As a Floridian, I can not understand why you won't hold a town hall. We have a lot of concerns, and you won't hear us. Yes, the conversations would be difficult, and there would likely be some hot topics. But please understand that we are passionate about some issues and feel like you are only it for yourself and your wealthy donors, and not for us and not representing us,

Realizing that, I wanted to share a few topics and my thoughts on them.
1. Russia. The evidence shows that their was a hack of sorts and influence by Russian agents in our election. Our democracy was subverted. Where is your senate panel on this? You haven't advance much over the last few weeks. We need to see the investigation continue!

2. Trump. You said, effectively, get over it and help the man have success. No. No. And no again. The man is a petulant child, who is making money as president because he is president. He has hired family to work for him. He has obstructed justice, at least in a way that should garner more outrage. He continues to embarasss us with our allies. He has passed classified information to others. He had Russians in the White House as guests. And on and on. He must not go unchecked. You must do your job and keep the balance of power.

3. The budget. What he has proposed is insane. Effectively he proposes guts from every social program and pays for his stupid wall, and his golf outings. I realize congress passes the budget, but you can't just stand idly by and pretend like this is okay. Social programs are one of the things your state, and particular, your community relies on. You can't just leave us in the (I would say cold, but it's Florida so I'll say) heat.

4. Big corporations, finance, and Wall Street. Letting big corporations, and particularly banks, run amok will harm us. The sensible regulations that were put in place in 2008 should protect us against another financial crisis like in 2008. We can't just deregulate and expect companies to do the right thing. There were surely be run away inflation, rising consumer prices, and likely higher unemployment as companies look to maximize their profit. Floridians are as vulnerable as anyone - and because we are a tourist economy, we rely on others spending money to come here. If they don't have disposable income, we all lose.

5. Immigration and visas. Similar to my point on a tourist economy, we need people visiting from other places to invigorate our economy and keep hotel rooms full. We can't just keep casting people out and calling them bad hombres. We can't just deport people Willy nilly. What are your thoughts on the person who came over in the Mariel boat lift in 1980 who was a legal resident, but is now awaiting a deportation proceeding to Cuba. I realize it's complicated, but it illustrates a problem: after 40 years here, he's being sent to a country he doesn't know. How can you let things like that slide?

6. And finally, healthcare. We need universal care. We need to know we are always covered. It shouldn't come down to whether we can afford private care. This is a right that all first world nations offer. We should too. It shouldn't be that your state will have a high level of uninsured and have to try and get sub-par care, rely on public hospitals if that's even possible, or simply die. No. we can and should do better. Medicare should be available for seniors and others who built this country. Medicaid needs to be there for the vulnerable among us. It shouldn't be left to the states to decide how to administer healthcare. That's ridiculous and will never work. Stand up for us, and fight for what's right!

We're Floridians and we need you to stand up for us.