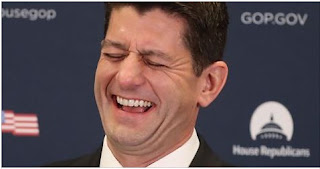 Sometimes things are not quite what they seem in the world of politics. I watched "trumpcare" get rammed through the house today in a spectacularly absurd way, with no budget scoring, a hodgepodge of silly items listed out (some added at the very last minute) and of course no one - and I mean not a single congressman/woman - read it.
They violated their own doctrine of allowing for transparency (the pledge to America) which calls for them to post a bill publicly and take time to review it.
But the thing is that passage of this bill will actually harm Americans, those that our congress people are elected to represent. And how did congress respond to its passage? Why by having what amounts to a keg party with the orange cheeto!  Yes they celebrated their "victory" of harming everyday folks.  Nice guys (and girls). But don't forget that they are all up for reelection in 18 months. It's our duty to ensure that they're not re-elected.
Anyway, back to my main point: it occurred to me later in the day that this wasn't quite as cut and dried as it seemed. Ryan and his ilk have such loathing for Obama that they will stop at nothing - even the threat of hurting Americans - to attack his legacy. And in the near term, they lined up donors for their re-election campaign, and managed to get specific concessions from other legislators for their own pet items. And they appeased el donaldo for now ("look we did all we could!") to try and get him to give them some of what they have on their agenda.
And all the while, they were pretty certain that the bill would go nowhere in the senate. Ryan hinted at this yesterday when he was asked about it and replied "we'll let the senate figure out the details."  That's code for "I don't give a shit, I'm just #winning"
The senate, of course, said that the bill was crap and would craft their own.  But due to technical issues, it has a bit of an uncertain future: due to their own rules, they need 60 votes to get legislation through.  And even so, getting to 51 votes (or really even 50 so pence can break a tie) is going to be tough.
The silver lining here is something I noted on social media earlier: as a nation, it seems we are more passionate about the political system.  People know who they're representative is, how to reach them, and know when they do (or don't) have town halls. We're more aware of the political process and are rallying and engaged. Those are all pretty amazing, good things.
at May 04, 2017