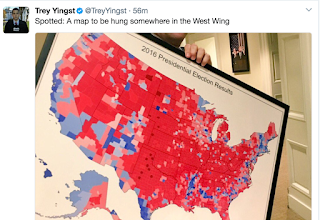 Does anyone else see this?  El donaldo is selling the fact that he won really hard.  He's got a map he put up somewhere in the whitehouse, and he has copies he hands out at time.  Weird enough, but there's a purpose here.  And it was more or less revealed when he announced his intent to get to the bottom of how Hillary won the popular vote by so much.
Clearly, there's a game being played.  And it seems to me that the intent will be to find whatever he can, and the only answer they can possibly come up with will be to suppress the vote.  And if that's the case, it's all over. Who needs gerrymandering when you can simply stop some peop,e from voting?
We must stop this.