Who killed the USFL? 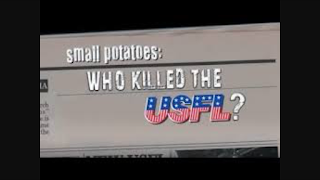 I live the 30 for 30 series that appears on ESPN. Every episode I've seen has been well researched and compelling.

But one stands out as especially relevant. In who killed the USFL, Mike
Tolling posits:
"Well, it seems that a certain high-profile and impatient team owner, whose name now adorns towers and hotels and golf courses all over the world, had convinced his colleagues that the league should either move to a fall season and go head-to-head with the NFL, or fold its tents."

You can read the full summary here:
http://www.espn.com/30for30/film?page=small-potatoes-who-killed-the-usfl

Or watch it here:
http://www.youtube.com/watch?v=O-f5fQo5IkA&sns=em

But in typical Trump fashion, he calls mike dishonest and a loser because he's incredibly thin skinned. You can read about that aspect here:
http://www.foxsports.com/buzzer/story/donald-trump-usfl-letter-on-film-30-for-30-mike-tollin-022216
at August 28, 2016 No comments: 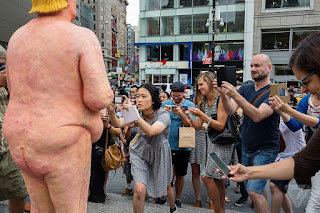 "NYC Parks stands firmly against any unpermitted erection in city parks, no matter how small."

In my post about JFK, I mentioned the Zapruder film as a key piece of evidence that we have.  But there are some unusual things about the film that have been gnawing at me, so I did a little more sleuthing on this topic.

Some people will tell you its edited.  Some will tell you its a hoax.  Some cling to it.  But there was one guy who caught my attention because the sign for the "Stemmons Freeway" just didn't look right in the film; and it does seem a little odd that its there and covers a lot of area, and lasts for maybe 1/3 of the film.

Also, in a correction of something I said in the JFK post, I heard there was another version of the Zapruder film - but as far as I know, the unedited, original version does not actually exist.

I was curious where the sign was in relation to Zapruder.  That's when I happened onto about 40 seconds of video that panned around between the crowd and toward the man on the pedestal.  It stops just before the presidents motorcade arrives, not surprisingly, given how there seemed to be a lot of agents collecting film and pictures.

Anyway, what I did was to create a sort of panorama from the video; and then added in the sightline.  Stop and think about this for a moment: guy gets a new camera. He is going to use it to make a film of the president passing by.  He works nearby so he's familiar with the area. He climbs up on a step to get the best shot he can, with an unobstructed view....and then he picks a place where a sign covers a lot of this view. Yeah, I don't think so.  If you look at the sightline I've shown, it seems he would have been almost completely over the sign - it should have appeared in just a small portion at the bottom of the screen.

But something else caught my attention.  In the short film, the people around the sign itself are cheering.  They're jumping up and down.  They're waving their arms.  And they're all looking expectantly at the first motorcycle, which is just around the corner as the film ends.

Yet in the Zapruder film, they're standing motionless, and don't seem to notice the president passing.  Strange.

Unless it was edited.

Again, I'm not a conspiracy theorist, but it seems odd.

The main problem comes in actually editing 8mm film.  Its really small, and notoriously hard to work with.  But, I did some editing in the 70s and into the 80s on this format of film. Its hard, but not impossible,  And companies made equipment for these purposes. But making changes to the content of the film, that actually looks otherwise fairly normal?  That seems even more unlikely. 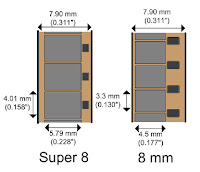 But if there was another film, in a larger format? Then, maybe. But Zapruder had an 8mm camera and the camera position is about right, generally,

And one last thing about this topic.  Zapruder had used this camera a little, and was familiar with how to shoot a film.  And yet, he captures the limo all the way at the bottom of the frame, so the limo is almost completely out of the field of view.  We see the people, and a large amount of the grass in the plaza.  This can't be the shot he was planning... along the lines of the location he picked, why would he film like this if he went to that much trouble to get an unobstructed view?  It's possible he was caught up in the moment or that he was aware of what was going on and slightly distracted of course.

But who knows?  Its all speculation at this point.  Very strange, unexplainable circumstances.  And answers we will never have, probably.