The NFL can keep their crappy product. 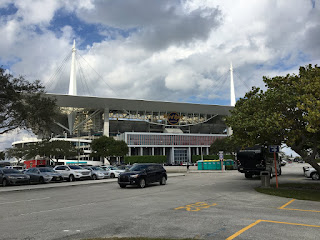 I was a fan of the dolphins from a young age. I started Daves Bitchin look at the Miami Dolphins as a means to get on the internet and express my thoughts about what was a fun product coming into the early 90s.

But...Somewhere along the way, my interest in the Dolphins waned. So I took in a broader view of the NFL to get my "football fix" ... but then, that waned too.

And so ...I wanted to tell you all I was unequivocally done.

My reasons are threefold:

First it's about the product. There are too many commercials and other stoppages in play.

And the product on the field, when they do play, isn't so great.

There are very few players who stand out, and I'm tired of many teams saying "hey we'll get it right *next* year"...you want me to watch and pay for your poor decisions, poor coaching, and not-so-great player development? No thanks.

Plus concussions coming to light and being mostly ignored isn't right.

Second, it's about the money. It's gotten out of hand, and that's at least part of why there are so many commercials.

Players are less accessible than they were, and you don't just see them in the grocery store buying toilet paper much anymore.

Plus this constant cash grab for Super Bowls, for teams to build stadia, and for tax breaks is absurd.

Of course the NFL changing its status to better shield their profits (and pay less in tax) is silly.

The owner of the Dolphins doesn't live in Miami and clearly doesn't care about the community. But he wants your money! That's just too bad. I won't give it to him.

Third it's the politics of it all. Players chose to protest because they have a platform. People on both sides get silly when discussing it.

The NFL makes a point of saying they want to stay out of the politics of it, but then come up with a haphazard policy.

The owners say things like honor, and respect, and a desire to not let the players make a political statement.

But then we hear Stephen Ross saying he talks to trump all the time and that swayed his thinking and he instituted a new policy. And shortly after that the cardinals owner tweets his praise of trump from the teams twitter account (rather than his own personal account) and on and on.

Of course they can do what they want; I don't care that they love or hate the politicians. What I don't like is for them to say one thing and do another. This isn't about honor or respect; it's about politics. For them. Which is ultimately about money. And it makes the games even more meaningless.

Fold in there this nonsense about flyovers and saluting the troops, patriotism, and being so overly concerned about the flag ... while the DoD pays for all of that supposed goodwill and it just feels murky.

And so for all of those reasons I'm out.

I'm not here to debate it, I'm simply telling you what I think. If you want to keep watching, then enjoy.

I will not be posting to the Dolphins blog that exists within this domain. But, I will leave the site up - at least for now - as a forum for others to talk about this team.

For the record, I discarded nearly everything dolphins related I owned. I only kept a few items from the 70s and early 80s, when the team was still meaningful to me as a youngster. 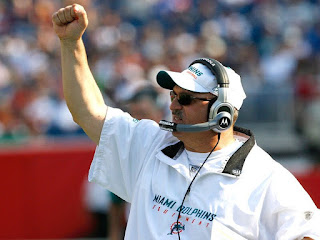 It's sad that Tony Sparano died unexpectedly this weekend. As my grandfather used to say "he never stole a freight train"...

But as I thought about him and the way he'd give fist pumps for scoring field goals I chuckled...and in light of the current dolphins stance on protesting this image takes on a whole new meaning...

Maybe the players should protest by doing what Tony did.
at July 23, 2018 No comments: