An open letter to my GOP senators

Subject: you are wrong about the January 6th commission

Either you are complicit in the actions on that day, acted against our government yourself, or you are supporting protecting those who were. In any case, you are allowing a seditious act to have been committed and are endorsing it.

An independent committee was necessary to get to the truth. But I guess that's just too much for today's Republican Party. You only care about votes and money than actually protecting and serving the constitution.

Abraham Lincoln once said (to paraphrase) that the only way the United States could be destroyed was from within. It takes a willful act from those who know better to undermine our establishment.

You have shown yourself to be a coward and while you opine about foreign terrorists bent on destroying us, you turn a blind eye to domestic terrorism and the very real threat to our democracy.

History was already written that shows how incompetent you are. Your vote on this matter merely underscores what we already knew.

If you could feel shame, surely you would have some now. But we know you can't feel any.

So our only choice is to remove you from office - by our vote, rather than the means by which you wanted to allow on Jan 6th
at May 31, 2021 No comments:

The pandemic isn’t quite over...

Although it doesn't get a lot of press, things aren't going so great in India or Brazil. Case rates are up, distribution of vaccine is slow, and variants have emerged that make the virus spread faster.

And so far the vaccines we have available will protect us against these variants.

By the way, we also have noted that having the virus once doesn't stop someone from getting it again, apparently.

So we've got a ways to go. Meanwhile, here in the US, things are better. And a return to something like normal makes sense if you are vaccinated. You are somewhere around 95% protected from getting a severe case of the virus, though you may get it and feel a little sick. And you can still spread it.

But now that vaccines are widely available to anyone over 12, there's no reason not to get one. Aside from some fringey bullshit, most adults should have one already, or be planning to get one shortly.

And frankly, to those people who choose to not get one, the burden shifts to you. We did our part to curb the spread. We wore a mask, stayed home, and now we have the vaccine.

If those of us who are vaccinated choose to go out unmasked and wind up infecting you, we shouldn't feel bad about it. You had the opportunity to get vaccinated. And if you didn't, well, that's not our problem.

(Disclaimer: if we know we'll be around someone vulnerable we can and should still mask)

I really can't understand eschewing the vaccine based on stupid and fatally flawed "junk science" or religion or political ideology.

﻿On that topic, you may have noticed that the covid case rates and covid deaths have been decreasing and it's being hailed as good...

And it is. With a caveat.

Case rates have always simply been a barometer. The positivity rate has always been based on the population at large who choose to get tested.

Now there's a reduction in testing numbers, because large volume sites are closing, so there aren't as many people being tested. And the people who are vaccinated aren't getting tested...

In short, the positivity rate among those being tested is somewhere around the same - but the number of positive tests has been decreasing.

The death rate from covid is more specific. There's a percentage of people who died "from covid" but never got tested, and there are people who tested positive but died from "other causes"... it's been suggested that these two numbers essentially cancel out, so the death rate may be something close to accurate.

So if we look at the death rates falling over the last few weeks, we notice something: it has fallen by about 40%, which happens to be the vaccination rate.

This is surely not a coincidence.

And it would suggest that the death rate, not unlike the positivity rate, remains the same for the UNvaccinated people.

So if you need another reason to get a vaccine, there you go.

Take advantage of the lotterys, giveaways, and other things that are being offered, and join the millions who see through the nonsense.

In case you ever doubted that sports are nothing more than a cash grab....

FAST COMPANY: Why workers are calling BS on leaders about returning to the office

﻿I've heard the stories from others, and am seeing starting at my workplace too.
One company said "hey, we do business face-to-face" (even though they are truly a stock trading type company) and then told workers "we never actually left; it's not a return to office...we've always been here...that was always temporary"
Why workers are calling BS on leaders about returning to the office
As vaccinations and relaxed health guidelines make returning to the office a reality for more companies, there seems to be a disconnect between managers and their workers over remote work.

Trust those around you? 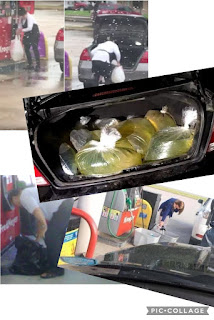 ﻿The world is upside down. We have around 30% of the population that still believes the Orange menace won the election. We had an insurrection. And there are still a subset of those people who believe the pandemic is a hoax and/or won't get a vaccine for supercilious reasons.

And the CDC tells us to trust those around us as we head back out to something-that-resembles normal.

But don't worry! It'll be okay!

Maybe I'm (relatively ?) safe. But there is still much research being done on whether that's true.

On the one hand, we are still all in this together. So we should still be trying to protect ourselves and those people we're being asked to trust.

And on the other, if people are stupid enough to fill plastic bags with gas, then what's the point? Because we are all doomed anyway.

﻿We're nowhere near the herd immunity, as vaccination rates remain too low (we are at about 36% of the population at this moment, where it is believed 70% will need to be vaccinated!), and yet the CDC (which I never believed was political until sometime last year) made a pronouncement that we've had some sort of "breakthrough" and it's okay to take off masks and return to something-like-normal.

This is surely about the broad "economy" and wanting to let companies start to turn profits again. The Biden administration appears to be taking a calculated risk, in favor of the almighty dollar.

The cruise industry is battling to reopen. Because. Money.

But it doesn't stop there. You have the delightful members of the GOP, who, in no uncertain terms, want to continue to be profitable themselves. They change voting laws to protect their own interests (ie money) and when companies say something about it, they tell the companies to shut up and keep donating.

And their continued support of the orange menace is also nothing more than a cash grab. The former nincompotus still has his followers, and they still have their checkbooks open. And because the gop funds are managed by the covidiot, they have to "kiss the ring" to keep the money flowing.

It's actually kind of hilarious.

Then you listen to lil marco here in Florida. He told us after parkland he'd still take money from the nra because, well, they're big donors. And then twice over the last several months, he's repeated the same thing about issues where there are big donors. He doesn't care about you, the country, the environment, or anything else. He cares about that sweet, sweet cash.
at May 15, 2021 No comments:

﻿The belief is that we'll need a 70% vaccination rate to reach a "herd immunity" meaning that there is enough antigens to ensure everyone is protected.

Which puts us at 50% vaccinated. Still much lower than what's required for the herd immunity.

In that case, the only option is to continue wearing masks and distancing.

But many states. Like Flori-duh. Have basically said "fuck that" and want to just return to whatever we had pre-covid. Exactly as it was.

Now here's the cautionary tale. India saw its infection rates skyrocket last year. Then, it leveled off, and started to decline. Some people in power made the rather presumptuous statement that so many people had been infected that surely they had reached the herd immunity.

They opened back up. And...infection rates soared once again. People who had gotten the virus previously, and even some that were tested and shown to have the anti-bodies, got the virus again.

There was no herd immunity from having it.

Now there's a story about another mutation that's evolved for which the vaccine "probably" will provide immunity. It's still being studied, but this one is 20x more likely to spread, and the severe illness rates remain about the same across those infected.

So we must remain vigilant. We must keep wearing masks to protect ourselves and those around us who can't - or selfishly won't - get a vaccine.

And we have to start seeing the vaccination rates go up here - and around the world.

Don't be a one of those folks who thinks you know your body and they can't take your freedoms.

we should be better than this. Indeed.

THE ATLANTIC: Millions Are Saying No to the Vaccines. What Are They Thinking?

The article is a non-scientific look at why the vaccine is being rejected. But even so, it provides a window into the larger issues at hand.
The words "elite" and "civil liberties" and "liberal" come up a lot. And there's an undertone of a sense of what you might term "American exceptionalism."
People figure they know their own bodies, are completely selfish, and don't understand a virus. They mostly care about the fact that are being told to do something. And gosh darn it, no one can tell them what to do.
I sum it up as 'Murica. I got guns and I got religion. And that's good enough to protect *me* - so just let me live my life unencumbered by any rational thought.
It's sad in a way. And this is what we're up against. In order to move forward as a society, we need to get a better message across. On many topics.
We need to encourage people to think, and embrace science.

Read in The Atlantic: https://apple.news/AVavfaaNMRaGi7n7oHxNg6w 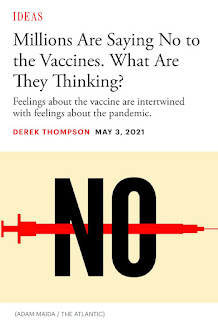