An open letter about #GOPTaxScam 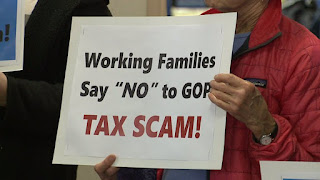 Here is a copy of the letter I sent to the undecided GOP senators about the tax plan. Feel free to use as much of it as you like when you reach out to your senators -

I am not a resident of your state, however, I wanted to reach out to you about the tax bill currently being considered because it's breadth will affect all of us.

While I do applaud any attempt to simplify the tax code, this bill was hastily conceived and has not been fully scored by the CBO, and therefore is unlikely to do much for residents of your state, and surely will have unintended consequences.

What we do know about this bill isn't promising. For one thing, the removal of the individual mandate will cause 13 or so million nationwide (a portion of those in your state) to be uninsured, and will also raise premiums by around 10% for most people.

Meanwhile, Medicare Funding would be cut by $25 billion. That would disproportionately affect people with disabilities and the elderly – our friends and family members who need it the most.

Also, the "average tax cut" is just a myth. 50% or so of tax cuts would go to the top 5% wealthiest households in the country in the first year of the law, and gives 98% of millionaires a tax cut compared to just 27% of middle class Americans. Taxes will go up - on average - for people making under $75,000.

While some tout the potential for job creation, I think it's safe to say that the opposite is likely true: corporations will have no incentive to spend the additional tax savings, and will be more likely to move more money offshore and essentially hoard it. And the wording in the bill would encourage more outsourcing of jobs.

Furthermore, there will be cuts to infrastructure investment which would mean our roads and bridges will continue to deteriorate. And surely, when there is the inevitable next storm, less money will be available for aid and repairs.

With changes to federal aid and block grants, your state may have to increase taxes to cover the losses form federal funds.

But it doesn't stop there. Students with loans, those working on research at universities, people with medical expenses, and teachers will all be harmed by the changes to the tax code.

There are also items contained within that have nothing to do with taxation: allowing churches to have a political voice, and restricting abortion are a couple of examples that make this more than a simple change to the tax code.

In the end, the deficit will surely grow, based on the reduced taxation. The number will likely be in the trillions. We all know that many republicans believe that we should reduce the deficit; assuming you believe this as well, surely you can not find this acceptable.

And lest I forget, while Donald Trump assured us that he gets no benefit from this tax bill, but we can see this is utter nonsense. He, personally, will save tens of billions on his tax bill. This is totally self serving and should be treated accordingly. He is pushing legislation that will directly benefit him, and this is not acceptable.

I hope you will vote NO on what many call the GOP tax scam. 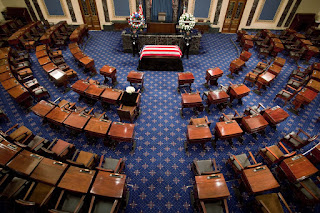 We have definitely jumped yet another shark.

Once again we find ourselves looking at a huge piece of legislation that will adversely affect millions of Americans, our financial security, and a chunk of our economy.

And that future rests on, essentially, 3 people. Three freakin people represent the 350 million people and decide the future of some portion of this country.

It amazes me that the GOP has taken a position that they want what they want, and have changed the inner workings of congress to subvert normal order and not review any of these ginormous bills, hold no meaningful public hearings, and then put pressure on the elected people or to just vote yes.

And then, once congress has invariably voted yes, they use reconciliation to morph the bill into something even more harmful ... simply because they can.

So come on you three. Vote no!

You want changes to healthcare? To taxation? Then have at it. But make it an open process and listen to your constituents. Not just the wealthy donors.

I find it interesting that some assert their 2nd amendment right essentially is more important than anything else contained in the constitution.  And that "arms" refers to any/every thing that shoots bullets.

In the 1920s, our congress saw the use of machine guns as bad, and decided to restrict their sale to protect the citizens. But gun manufacturers figured out that by calling them "assault rifles" and making them "semi" automatic, they could essentially get around the law.  And then, others figured out that you could sell a kit that converted them to automatic, essentially skirting the law.  Aside: the word "assault" appears in the name.  What could it possibly be used for?

And this congress does nothing because "arms" means whatever you want.

The framers of the constitution had no idea what the future held for weaponry. A musket, like they had at the time, took anywhere from 20 seconds to a minute to load a single shot (depending on which type they were using and the the training of the person using it), and they were not mass produced in a factory - so only some people had them and they were mostly used to maintain order, frequently by slave owners.
And don't forget that they were wildly inaccurate. https://allthingsliberty.com/2013/07/the-inaccuracy-of-muskets/
So yes, the right to keep and bear arms should extend to anything that was developed in the 18th century. Or how about to simpler devices that don't have the ability to kill dozens in a few seconds?
That's the funny thing about the constitution.  Like many older documents, it has some things that don't really fit into today's world.
Another oddity is the 3/5ths compromise.  Some will tell you it's about black people being considered less of a person than a white person.  And that's true, but it's not.  Essentially, for the purposes of establishing representation that's how they do the math.  Remember representation is based on the population.  So, if you owned 100 slaves, they would only count as 60 people for this purpose.  And then, if a representative is assigned for every 1,000 people, this would matter.
But this law has been tweaked through amendments, because that's how we evolve.
And then, as I've pointed out before, we have the "Christian nation" argument.  It doesn't say that anywhere in the constitution.  And if the founders had tried to establish a religion, it would have been Anglican, because that's what most of them were - at least until it was time to pull away from the monarchy.
So in this case, we're interpreting the constitution to mean something it doesn't say.
My point is that it was written in a different time, and it serves as a good foundation, but it must be interpreted to be fully understood - so in one case. We take it literally, in another we misunderstand it but have amended it to make it clearer, and in the last we're assuming something that's not there.
I'm all for an amendment that clarifies what an "arm" is... 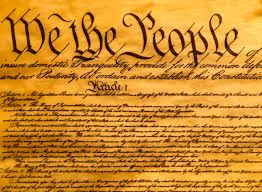 If you think otherwise you're a loser. 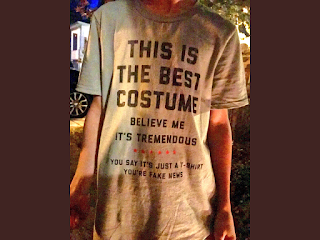 This is a tad unusual, Ivanka edition

I get it.  We all make friends with people we have something in common with, and sometimes outsiders can't figure out why we might have such and such friend.
At some point, ivanka made friends with Wendi Deng, who was the wife of Rupert Murdoch, the mogul who owns Fox News. That's interesting in a way, but not particularly newsworthy.
But Deng divorced Murdoch in 2013, and is rumored to be dating .... Vladimir Putin.  And she has allegedly given ivanka access to Putin, or at least putins office because there's an email that suggests she (ivanka) had a chance to sit in Putins chair.  Whether it's actually true or not, it's not something most of us would ever do, have access to, or think about. Under normal circumstances, this might be met with a shrug.  But under the circumstances we have today, it should be rightly scrutinized.
But wait, there's more! Deng at some point introduced ivanka to another socialite friend, Dasha Zhukova.  She is the wife of Russian oligarch Roman Abramovich.  One person noted that "There's no oligarch among those still accepted in the West who's closer and more trusted by Putin than Abramovich."
Well, isn't that a remarkable coincidence?
There are photos of ivanka with dasha, of Jared and ivanka with the abramoviches at sporting events, and they have reportedly dined together. Again, nothing that unusual....except that in context it seems odd.
Now they did disclose their relationship with abramovich on their federal forms, so in many ways there is "nothing to see here" .... except the company they are keeping appears to be closely tied to putin. And given the Russian influence, some of the timing, and the ongoing investigations, you kind of have to figure that there is more to this story.
These relationships can't be happenstance and unconnected to events we're hearing about. And el donaldo's recent (reported) rift with Jared, where he's saying that dear son-in-law led him to do things would lend credence to that.  Even if it's not connected, he's throwing shade to make it look like it's a possibility.
You can read more about ivankas relationships here -
https://www.bloomberg.com/news/articles/2017-08-18/billionaire-ally-of-putin-socialized-with-kushner-ivanka-trump 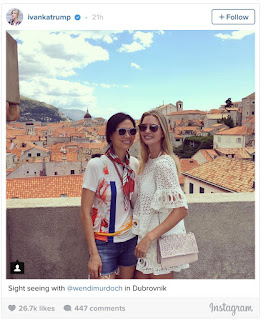