Payless fools influencers with a fake store #FakeNews at its finest 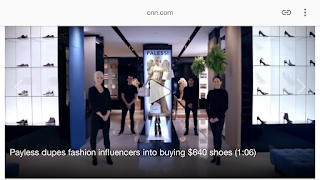 Be wary of stories that seem to run counter to what you know. Payless showed off how it easy to be duped if you suspend your disbelief.

I simply can't believe that my vote - the one thing that separates us a functioning democracy - will be viewed through the lens of lawyers and lawsuits.

And worse still - this is not the first time we've seen that in Florida.

What's the point of voting if I can't just trust that my vote countered and matters?
at November 10, 2018 No comments: 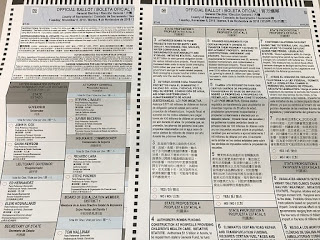 I'm not sure if anyone outside of Florida knows how the voting process works here. We fill out ballots like the ones shown on this post, though obviously this wasn't the one used last week.

You bubble in your selection, then walk over to an optical reader that scans your ballot.

When you walk into the polling place, you swipe your license or id, or fill out an affidavit, which is recorded.

Absentee ballots are likewise recorded, and they track when they were received back.

A paper ballot is printed and it has on it a code that matches to that ID swipe or request for a ballot.

The first step in any recount would be to compare the totals - how many were swiped, had affidavits, or had been received back - and compare it to what you have. If there was a discrepancy, or a concern about what you see, then you could match them up by code, and see what happened.

And that would eliminate the possibility that there were new ballots added.

And count away at that point. All that really matters is that every vote gets counted. I live in this county. I want to be assured that it was free and fair, and that my vote actually did get counted.

There are a couple of douchebags (a technical term) who are saying it's a liberal conspiracy to undermine the election. If the vote totals match and don't show anything unusual then this is utter nonsense. It seems that they are trying to disenfranchise ME to gain power. Not cool on any level. It's personal.

Now you could rightfully ask the question of what happened: incompetence, an honest mistake, or something more nefarious.

But that should happen after we get on with the counting.

As far as possibly being nefarious, we could read about or build conspiracy theories, but mostly they don't make sense.

As a mental exercise, I tried to build a few that involved cheating by either side, one that was for personal gain, and an elaborate few just because...

Some ended in a why/for what purpose. Some ended in a "yeah but it would be easy to spot if anyone looked, and they are." And the rest were just so wildly silly that they were unlikely.

I would argue it's incompetence at some level. But that's just me.
at November 10, 2018 No comments:

It’s Election Day. No excuses. Get out and #Vote The jaunty melody belies the serious nature of this song, which is about the 1992 Los Angeles Riots. The song was written by the group's guitarist Greg Camp, who told Songfacts: "The song was basically a social and racial battle cry. It was a sort of 'Can't we all get along?' song for the time when I wrote it. It was just about all the things that were going on around me as a young person. And I'm, like, God, what is going on? I don't understand why this is happening. It's like we might as well be walking around a planet on fire."

So don't sit back kick back and watch the world get bushwhackedNews at 10:00 your neighborhood is under attack

Remember that you should vote for your own best interests. Not for party. Not for the guy/gal who says what they want you to believe. Vote for the person who will represent you.

Lately we’ve been hearing about the migrant caravan.  It’s coming. It’s dangerous. The want to destroy “our” way of life.

What’s the plan exactly?  People - including women and children - are traveling many hundreds of miles mostly on foot. They have limited rations, and surely they are tired. Are they going to make a big rush across the border? Miles and miles of desert to get...to...where?

Who remembers their civil war history?  In the turning point of the war we had the battle of Gettysburg. One of the big moments came when the confederate army called in more troops. A contingent (I think from NC) travelled many hundreds of miles on foot to reach PA, over the course of a few days. They were well trained, in good physical condition, and supplied well enough to make them ready reinforcements. They had a mere couple of hours rest, and were put into battle as part of “Pickett’s charge” - a full out assault on union positions. They lost. Decisively.

Do you think a group from Central America would fare better with objectives that are completely unclear?

Besides the group size is estimated to be under 7,000.  Think about how many people live in your city. I think that border patrol and the police can handle a group that size. Thousands of troops are required to handle this? Yeah no.

You can educate yourself on the caravan here. https://www.bbc.com/news/world-latin-america-45951782

But what of the Muslim terrorists who are reported to be among them? Hmmm. A group that speaks Spanish and native dialects welcomes in people who don’t speak the language and are, what, brandishing guns? Sounds unlikely.

Meanwhile in what I like to call the “real world” we have actual people committing actual crimes against fellow Americans. Often with guns. But because they don’t fit the narrative (they’re white rather than middle eastern) they are ignored.

Wake up and pay attention! The threat is not from the boogey man, it’s from these nationalists who believe they are better than everyone else.

Arm yourself with knowledge.