An intriguing family mystery of sorts

A while back, I talked about my own genealogy research.

And then this week, I got a random letter about some property a distant relative owned.

So I opened up the Family Search history and poked around, curious about whether this person was related. It turns out that my paternal grandfather had a sister, which I knew.

She travelled from Newfoundland to NY, at some point to room with my grandfather, which I did not know.

And later, she married and had a daughter. That would be my dads first cousin, who lived in NY.

I asked my mom about it and she remembered that my grandfather was "close to his sister" ... and yet my mom doesn't think he saw her after he moved to Florida, in about 1942. And she doesn't recall my dad ever meeting (or even knowing about) his cousin. Or having seen his aunt.

Aside: my dad spent some of the summer in NY at the worlds fair in 1964, and didn't "look her up" while he was there, most likely because he didn't know she was there.

That's just strange in a way.

I also poked around my grandfathers other siblings, and they each had children, and they'd be dads first cousins as well. They were in Canada, so I get why we never saw them. But I didn't even know about all of them.

We met some of them a number of years ago, but there are more than we knew about.

It's weird how family simply drifts and loses touch. Or at least used to in this pre-connected world.
at February 17, 2021 No comments:

I found a show called Bletchley Circle on Amazon Prime video.  And I have to say that while the show is good, the premise is what grabbed me, and its really has stuck with me.
So here's the underlying story: while the men were off fighting the second world war, a few were left to oversee the operation of intelligence gathering, codebreaking, and determining how to best counter German actions.  But the grunt work of actually breaking the codes and understanding what was in the messages was left to a group of gifted women.  They were good at recognizing patterns, looking at threads, and generally following up on leads as they sat behind desks in Bletchley or worked with Turing on his enigma machine.
And then the war ended.  Turing was outed as being gay and ostracized and shunned for the rest of his life (before committing suicide).  And the women went back to doing the mundane chores that were allotted to women in England.  Everyone that worked on codebreaking or intelligence was required to sign documents that they would never reveal what they did during the war, under penalty of treason.
A group of these women, upon whom the story revolves, had agreed to "never be ordinary..." and yet here we are 9 years after the war, and one is a librarian, one is married with two children, one is married with an abusive husband, and one has been anything but ordinary.
But the bug to follow their passion and be creative and use those skills still lives in them, and they wind up chasing down a serial killer.
Its the nature of this utilizing women when they were needed, and yet putting them back into "traditional roles" after the war that got me.  Its kind of sad in a way.  They were never given their due, well perhaps until recently.  And the work they did mostly remained secret.
I wonder how much further ahead England (or society in general) would have been if they had been encouraged to continue being clever along the way? 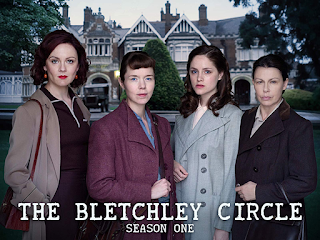 Another letter about impeachment to Florida’s senators.

I noted yesterday that while the house impeachment manager showed the video that *unequivocally* demonstrates that trump called for the insurrection, you had your head down, pretending to read some papers.

When history books tell the accounts of January 6th, they will surely talk about the assault on democracy, insurrection, and sedition. And they will undoubtedly list the 44 senators who chose to vote against impeachment for their own selfish reasons.

And your name will be on that list. History will judge you for these actions. And remember you as being a self-involved coward who was complicit in the actions that day.

You are an embarrassment to florida and to our nation.

There is no mistake. Trump committed a high crime and your duty is to uphold the constitution. But you violated your own oath of office and that is your legacy.
at February 10, 2021 No comments:

Sometimes the world is a funny place.

I guess they can literally write the book on how not to engineer a project.

Nah, he has to wear a mask even if he doesn't want to. 🤷🏼‍♀️ Those are the rules everywhere. Grow up and wear your mask properly, or stay home. I work as a cashier in my local grocery store, I am literally putting myself and my family at risk to serve the public, and not wearing a mask properly or at all, is one of the most selfish things you can do (not that you people care, all that matters to you is your comfort and your feelings). A lot of my coworkers have had to stay home for two weeks, sometimes a whole month, because they're getting exposed to the virus thanks to selfish customers. Everyone would rather report us to corporate and accuse us of "discrimination" and "being mean"– essentially lying about the situation, just so they can get out of wearing a nask! But of course they won't stay home because it's "not fair to make them suffer by trapping them at home", but they will make up any excuse to not wear a mask. Heck, they would probably flip if they knew any grocery employees got sick, and accuse us of putting *them* at risk for it!

I am over all excuses for not wearing a nask. Tell someone who cares, because it ain't me. Wear a damn mask!

I watched the attached video (at 8:56) and started thinking about how rumors get going.
Back when I did my Dolphins page, I would sometimes get a nugget of information that I would research and then write about. And, once in a while, on a lark and to test the limits of people’s belief in what they read (and to conduct a sort of social experiment too!), I would get a nugget and “go with my gut” and run with it. Not that I lied or made stuff up, per se, but I’d roll with “news” sometimes.
If it was especially salacious, whether I had corroborated it or not, it might get some traction. That’s just how people think.
But a friend of mine, Brian over at Phinatics, decided one April fools day to have a little fun. He wrote an article that was absurd. I don’t remember the details, but it was some blockbuster trade he was “breaking news” on. But the trade was silly. And every source he linked to pointed to Wikipedia’s April fools page.
But, hilariously, this got picked up by most news outlets without doing any research. It was all over the internet as they say. People asked him (and other dolphins site owners) about it.
And there ya go. All you need is a nugget of truth. And the willing audience who wants it to be true. And people eat it up.
I suppose it’s human nature, sad though it might be.
at February 02, 2021 No comments:

An open letter to GOP senators on impeachment.

It strikes me that mr trump committed a crime in his handling of the events before the terrorist attack on the Capitol. In fact, I would suggest that his specific crime is sedition ("conduct or speech inciting people to rebel against the authority of a state or monarch") which is a high crime in this country.

And you are constitutionally bound to act on it.

You can (incorrectly and absurdly) argue that he didn't mean anything by his words. But the fact that many of those arrested in connection with this assault on democracy have said unequivocally that they acted because trump told them to. There is no ambiguity there.

I have heard your colleagues argue that he can't be tried for the impeachment because he already left office. To this, I have two comments: first, he committed this crime while in office and was impeached in the house while in office. We need to hold any/every one to account for their actions on that day. And he himself reportedly will offer a defense of "the election was stolen so I felt some obligation..." which makes no sense whatsoever. It is simply an open admission of guilt.

And second, I would ask you if your answer to the question of whether you think it would be different if he were still in office. Think carefully, because it's very likely that you are supporting an attempted coup, which makes you complicit in the actions.

You see, senator, there is no reason to simply stand behind trump other than thinking of yourself or your party.

This is a constitutional crisis of sorts, and we need to ensure that everyone who was involved in this riot on our establishment is punished for their actions. Every. Single. Person.

Do your job to the oath you swore to protect and defend the constitution.
at February 01, 2021 No comments: