Uvalde. Sandy Hook. Las Vegas. Sutherland Springs. Pulse Nightclub. San Bernardino.
Every single one of those massacres was done with an AR-15: an assault rifle that the NRA called "America's Rifle."
Meanwhile, the NRA and gun manufacturers are partying at a lavish NRA conference in Houston. Yes, in Texas where this shooting just happened. It's always too soon to talk about gun deaths, but never too soon to bring people together to celebrate gun culture - and make money.
For the good of our republic, and to save our lives, those that profit off mass murder need to be stopped.
Congress has a choice: cowardice or courage. They must hear from us NOW in this critical moment that assault weapons MUST BE BANNED.
It's time to call your congressman and senators to tell them what you think! Just Google their names (and if you're not sure who they are just Google who your representative is) and you'll find a contact page.
According to a recent poll, an overwhelming majority of Americans – 63% – want assault weapons banned.
No civilian should ever own one. They are so lethal, even police are afraid to stop mass shooters wielding them.
A tiny minority of armed lunatics and an evil gun industry protecting their profits spend millions buying off politicians who throw their hands up and blame anything but the guns for mass shootings.
Congress needs to hear from thousands of of Americans like us.  We have had ENOUGH of massacres, death, and grief.
at May 28, 2022 No comments:

Why every world map is wrong - Kayla Wolf

The governor wanted to undo the legislation that essentially created Disney world.

But it's worked for 50 years and Disney has mostly been a good citizen.

If you are going to undo it…maybe have a plan(?)

…so the authoritarian douche says he wants it undone, and with mere moments of discussion, it came to pass. Without considering the possible (and surely unintended!) consequences. Plus the supplementary legislation that came about in those 50 years - what happens there?

…but my basic question is quite simply why? What's his rationale? It appeared to come in response to Disney taking an awkward stand on the "don't say gay bill," but that's a response that's not really commensurate with the statement. And, in calling for the special session, the governor insisted it had something to do with his personal beef with Twitter.

You have to figure this has a deeper significance and surely is related to money and power.

I might suggest this has to do with Floridas natural resources. Until he became governor, there was an independent body called the south Florida water management district, which basically controlled water flows and monitored quality around lake okeechobee and south into the Everglades.

He folded it under him in some way, and made it a political game. They are no longer independent and have to abide by his rules.

Disney had broad authority over all of their waterways (in addition to power, sewer, and related utilities). They controlled water flow, water levels, and monitored quality. Disney had a decent environmental record on that front. But now…I'm assuming this would revert to the state. Meaning he controls all those waterways … and really all waterways in Florida.

That can't be good for us from an environmental perspective.
at May 08, 2022 No comments: 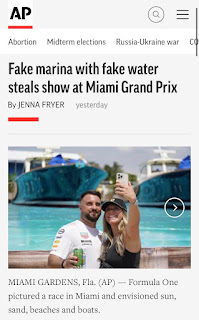 Plant based diets and economics

A couple of years ago, there were some new players in the plant based category. They had VC funding and had products who more closely resemble meat in texture and flavor.

The other players in the "vegetarian" category up their game to do similar products and go further.

Some of these players got involved with the fast food companies. Tests are run, and success is there, though not overwhelming so. A few fast food places drop items, some add more.

It was unclear how this might play out. Would this amount to anything?

And then McDonald's tries out a product … it looks like a failure. Until McDonalds discusses their product at an investor forum.

In short: The cost of doing business is high. Rising wages. Demand for quality ingredients. Other factors. They had to discard the dollar menu because the economics dictated it.

And then there's the cost of  meat and getting it to stores. The financial part of it suggests it's not a good long-term strategy. Meat is expensive and getting more so. The supply chain costs are going way up. And it's extremely perishable being fresh (or quick frozen). And there's the cost from an environmental standpoint. More land is needed. Destroying more of the environment.

McDonald's realizes that this isn't sustainable and they have to move to something other than traditional meat.

They'll be expanding their offerings to include more plant-based options. Then the cost shift will happen, where meat based products will cost more than plant based. And it will evolve to make items that you might not be able to tell the difference between…

Burger King also started talking about making their products more accessible, so they might use machines just for plant-based rather than sharing.

So the success of plant based will be driven by economics.

And ultimately we all may win. And have better products available. Sure the plant based ingredients are processed. And may not be "health foods" but it is progress toward a better future and sustainability.

A few years ago, the GOP decried the notion of "judicial activism."

It just wouldn't be right to legislate from the bench!

A couple of stolen Supreme Court seats, and another a couple that went to unqualified individuals, later…  and the this court is now deciding on what's right and essentially legislating where Congress has faltered.

The reasoning behind the repeal of Roe v Wade is flawed and nonsensical. Make no mistake this is judicial activism.

And now they'll go after a host of other items. The assault on us and our rights will be led by this small group of idiots.

Congress could codify (and arguably already should have codified) some of these things into law. But they're too busy fighting about nonsense (as always).

I watched a little from a couple of games…and yeah there are a few clever innovations. But the football itself is just bad. I mean worse than lower tier college football.

But as they say "it's still football," so I was still watching a little.

And then came the ad featuring the douche bag pillow salesman. Why does anyone allow him airtime? He's a traitor.

And that's when I decided that the football isn't good enough to simply ignore him and his asinine self.