Trump says he wanted Pence to overturn the 2020 election…

﻿Trump says he wanted Pence to overturn the 2020 election and falsely claims it was vice president's 'right'
So essentially what he's saying is that whoever is in power an simply stay in power from here on out. Kinda like a dictatorship?
Does that mean elections no longer matter, and since Biden is our current president, he can just stay there forever?
Or does it only apply if you have an R next to your name?
https://www.cnn.com/2022/01/30/politics/trump-pence-2020-election/index.html 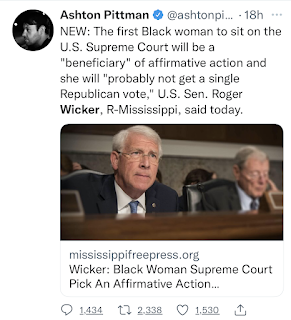 That’s some shade right there. 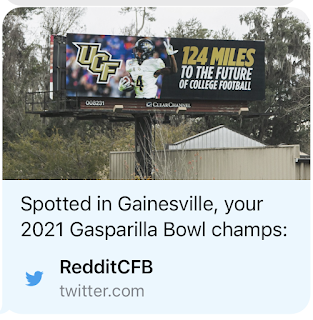 I saw a headline this morning to the effect of 'in response to the surf side tragedy, senate approves bill for state inspections'

In general, the legislation is a good idea. And maybe it's well written enough to do some good.

My issue has to with the fact that it took them 6 months to come up with something designed to actually protect citizens. But meanwhile, they could quickly and glibly cobble together a bill that forces twitter to allow 45 back on.

And, worse, they held a special legislative session to pass a law that school boards can't require masks.

Those were legislative priorities. But protecting citizens is not.

﻿In response to #45 getting booted from social media, the state of Florida made it a "legislative priority" to prohibit social media companies from banning politicians.

They passed a law … and it was blocked from implementation. Essentially saying that the state was not specific enough.

Predictably, the state has appealed.

But here's the rub. It's one state trying to tell a private company how to conduct business. Because…reasons!

Meanwhile, they fought hard against the White House requiring a vaccine mandate for private businesses. Because you can't tell private … business … what to …

And there's the not so subtle problem of equal protection. Each state can do what's in its own best interest. It's why we have different healthcare options depending on where you live, why insurance for cars and homes varies, why voting is inconsistent, and so on.

But one state wants to dictate how a private company, that is not even based in that state, operates in every state. And some states surely don't agree with Florida.

Yeah, this is the problem with having mini #45 serving as the governor here. His legislative "priorities" and how he allocated tax dollars to suit him … is insane.
at January 18, 2022 No comments:

This Novak Djokovic story is stupid 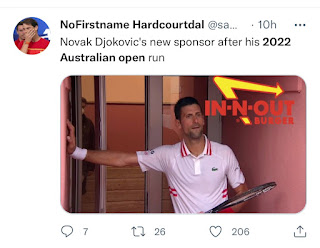 The whole thing. All of it. Is dumb.

Australia as a nation has its rules. Novak decided the rules didn't apply to him and looked for a loophole. "His team" found one and used the specter of the dollars associated with the tournament to try and exploit it.

A legal battle ensues and he wins, on the technical merits of how he used the loophole.

Then the country decides that there's a larger problem: politics. If you let him play fast and loose with the rules, then there are no rules. You can't enforce anything anymore. There's an election upcoming. They are at least trying to protect the public interest.

So they cancel his visa and expedite a court case to deport him.

At any point, he could have simply left. But instead he decided to be a self important, entitled, prick. The rules didn't apply to him. His team made the mistake, not him. He was there for the love of sport. He was persecuted. He has views on the whole pandemic that he wants to share.

The country probably didn't handle it correctly from the start. But they did ultimately handle it in the way that enforced their rules. And they had to use their legal system to sort it out.

I'm not here to debate whether they were right, or wrong, just that they had rules and they upheld them.

But I have to say I'm glad that he lost. For once, a pompous asshole gets his comeuppance in spite of his money and relative power.

And it's led to some great memes and funny comments. So winning! On several fronts.

"Novak is the first player to lose a major tennis match after missing two shots"
at January 16, 2022 No comments:

﻿The Supreme Court struck down Biden's mandate for businesses to require vaccines and related precautionary items.

First off, the end result was predictable. SCOTUS has a definite bias, and a mandate about public safety and health and well being is not specifically enumerated in the constitution. Although you could argue that it's in there in spirit, the justices didn't see it that way and so ruled "in favor of the constitution" that the president doesn't have that power over business.

It's not a good decision, but I maybe, kind of understand. Maybe.

The thing that gets me is that this defiance of a mandate even made it before the Supreme Court. Who brought it? Did they have legal standing? And what manner of petulance is this that someone felt the need to challenge the constitutionality of it?

Businesses, meanwhile, will do what's in their own best interest. Certainly some number of large companies will go ahead with vaccine mandates and protecting their employees and customers as a way to make things right in their own way. It might simply be that they are protecting themselves from lawsuits, or it could be that they are trying to do right by people. It really doesn't matter which.
at January 14, 2022 No comments:

The coaching carousel at the circus

For the last … decade? Or so? … the nfl has been all about winning now. You get a chance to prove yourself as a coach, and the goodwill around it may last as long as 4 years - if you're lucky. And if you're not, it may end after one (or in the middle of one of you really show yourself to be a jerk)

So every single year, there are anywhere between 6-9 head coaching jobs available. Yes, nearly 25% of the coaches are fired every year.

And for those teams that are really pathetic, they churn through a new coach regularly (the dolphins, for example, have had 11 coaches over 22 years. That's a new one every two years!)

With a new coach comes a new philosophy. A new set of players the coach likes. And a rebuild that sounds good on paper, but which inevitably gets the owner questioning the hire after a season or two.

And guess what? It's rare that these teams churning through coaches ever get any better. Sure they may show flash for one season. But it almost never lasts, and it's on to the next guy.

And yet the league is still popular. Fans still pay good money to see "their team" underperform.

The nfl is a joke.

Ted Lasso is a really good show, very enjoyable. Sure, some episodes are a little weird, but its all entertaining.
But this scene is pure comedic gold
at January 09, 2022 No comments:

Oh, so the tables are turned...

Hannity has a trove of text messages released, and he starts in with it being an invasion of his privacy! How could anyone allow for such a thing?! His indignance is clearly a defensive measure. And pretty funny.

Especially when you consider his stance on the patriot act, which became a thing after 9/11. Congress decided to allow various means of spying on citizens, including the collection of any communications, ostensibly as a means to prevent "terrorism". As I recall, he was all in on that.

What happened on Jan 6 was basically an act of domestic terrorism. Full stop. The insurrection would allow for communications between citizens to become public under the law.

But I guess a dipshit blowhard like Hannity can only see the threats to our nation being foreigners with accents.

And, for the record, I see that he was kind of, sort of, trying to stop the events in some way. But two things: first, somehow he knew about these events in advance. How did that come to pass? Does that make him complicit? What was going on there? And how much more does he know? He will have to come clean on this.

And second, the fact that he was aware of a seditious act being planned, but he didn't alert anyone, and rather tried to stop it via pleading on text, may expose him in a legal sense. He had an obligation to alert the fbi or others, and failure to do so may make him an accomplice to the crime in the eyes of the law.

It's no wonder he sees it as a problem *for him*

Every single person involved needs to be held accountable. Every one.
at January 04, 2022 No comments:

Antonio Brown, known purveyor of fake vaccine cards, has a meltdown and leaves the field and ostensibly gets kicked off the team and probably will be "blackballed" from the NFL for his antics.

Meanwhile, Aaron Rodgers, who knowingly broke the rules set forth by the NFL regarding vaccination and mask wearing, and lied to reporters and fans (or as he essentially says he "misled them, and they didn't ask followups so it's on them") … gets a free pass. As he did when broke the rules.

Rodgers is the leading candidate for the MVP of the league - in spite of his flaunting of the rules, and what's worse, missing a game because of it.

Somehow…he's going to be rewarded for his behavior?

Oh right. This was never about player safety. This was about making money and he sells tickets and makes it exciting so he gets the kudos, and none of those pesky rules apply to him.

He can use and promote quack science. Lie. Cheat. But win a football game and you're the man!