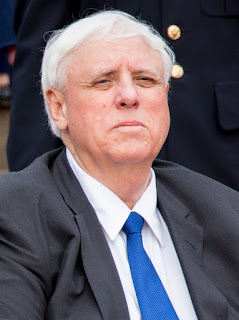 While the media looks at the story and marvels at the West Virginia governor who switched his party affiliation as something that "means" something, let me remind you that there's often more to a story like this than meets the eye.

First, and foremost, Jim justice (what a terrific name for a guy like this - eyes roll) comes off quite a bit like el trompo. He inherited his money and invested it in a business familiar to him, in this case coal mining, and built an empire. His business tactics are often questioned by those around him, and he has a string of unpaid bills, just like the cheeto

And not only that, he's friends with the trumps. He apparently hunts with eric and junior, so there's a connection that way too.

Somewhere along the way, he got involved with some Russian business types, selling them a mine. Now the story is that he sold it for $600 million, and bought it back a few years later for $5 million, but I can't verify that specific claim. There is also a piece about him owing these Russian investors something, again without any specific proof.

Nevertheless, there was a business deal regarding a mine.

Meanwhile, the coal industry struggles in this country and he takes a loss from a business perspective. In order to try and help himself, he decides it's time to run for office. Prior to 2015, he was a republican. He sees the gov race in WV as an opportunity and decides to run. But the state senate president is the GOP darling and announces his candidacy.

What option does justice have? He switches his party affiliation and runs against bill Cole (the republican), of course! And he wins in 2016.

But again, he's friends with the trumps. Do you suppose it's a remarkable coincidence that trump talks about coal incessantly - when a friend is simply trying to "save his business"? If you do, I have some swamp land to sell you...

So at a staged event (when trump needs a little distraction), he announces he's switching parties and endorsing trump! Remarkable. And the media eats it up.

There's no real news here, per se. The news is in another Russian connection, and the likely backdoor deal that happened to help alleviate some tax burdens or something.

No this was about two inherited-wealth-from-their-fathers men colluding to further enrich themselves at our expense. That's the story. Not some contrived nonsense about dems being abandoned.

Sigh. When will the media stop with the sensationalism and get to the real reasons for the "change of heart" ????
at August 04, 2017 No comments: