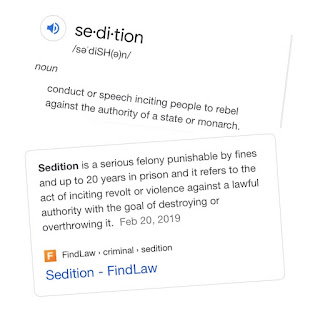 Sound like anyone we hear about in the news daily?

Here's to hoping that he, and those who enable him and blindly support him as elected officials, are held to account for their treachery.
at December 17, 2020 No comments:

This was one of the early cons pulled by trump, shortly after taking office. He and Scott walker put together a deal for the "8th wonder of the world" and it collapsed spectacularly, but with little fanfare.
https://www.theverge.com/2018/10/29/18027032/foxconn-wisconsin-plant-jobs-deal-subsidy-governor-scott-walker
But it didn't get much press, and so it went unnoticed by the true believers.  There are a lot of elements to this story, and I'd suggest you read them (and more), but the part that struck me was that this was a Taiwan-based company.  Taiwan has a contentious relationship with China, but still still is reliant on China.  So when trump decided on a trade war with China, he undercut this relationship. Because, of course he did.
Anyway, there's a follow up story here:
https://www.theverge.com/21507966/foxconn-empty-factories-wisconsin-jobs-loophole-trump

And another story on CNBC.
https://www.cnbc.com/2020/04/09/foxconn-says-it-met-hiring-targets-in-wisconsin-now-it-wants-its-money.html
And of course there was a human toll that the guardian reported on:
https://www.theguardian.com/us-news/2020/dec/08/wisconsin-foxconn-factory-residents-displaced
Walker, trump, and others were only in it for their own selfish reasons, assuredly money.
at December 16, 2020 No comments:

Predictable. Supreme Court rules in favor of the constitution

As I noted in a post earlier, it seemed unlikely the scotus would rule in favor of Texas in their suit against other states.

There was no constitutional issue at stake, and the states themselves run elections and had already worked through the courts up to the Individual state Supreme Courts. Constitutionally, that was the way this should have been handled.

And because of "equal protection," the states can run elections however they see fit. As long as they are running free and fair elections that don't favor one group, party, or location, they can apply the rules in whatever way suits them, so long as it fits within the general guidelines set forth in the US constitution.

And never mind that the down ballot races were not questioned by anyone. This was strictly about trump. A peculiar argument indeed.

And so, the court declined to hear further arguments, apparently with no dissenters, meaning it was a 9-0 decision; with all 6 "conservative justices" in concurrence. Justices Alito and Thomas had suggested letting Texas proceed with their suit, but with no other remedy. Had this been accepted, this would have meant that the vote would be certified, but Texas would have an opportunity to prove that they were harmed. But no other justices signed on, so this idea died.

I decided to slip into the rabbit hole of reaction, and read through some of the comments from maga-aligned folks. I would summarize what I saw thusly:

* some comments were wholly unintelligible. I mean through misused words, misspellings, and unclear statements, I really didn't understand what they meant

* the notion of civil war, which I first heard rush Limbaugh talk about a couple of days ago, came up frequently.

* as expected, there were a lot of comments about "the swamp" and how the Supreme Court had been subverted. Even though there are 2 justices who nearly always support pet conservative causes (in Alito and Thomas), and 3 others who trump appointed in this term. Seems logical to me...oh wait. No it doesn't.

* there were many, many mentions of prayer and god and how he would correct this action ... somehow

* a lot of name calling, and flat out saying that Biden is corrupt and communism or socialism (I think people get confused on what they mean) is coming to the United States and they are going to take your fredoms!

* there were claims it's not over, and trump would go over the courts heads, declare Marshall law, or otherwise stay in power (perhaps using Jedi mind tricks or magic?)

* some commentary was about how the democrats spent so much money to look into Russia interference (they even had a very specific number, 47 million repeated, which seems odd) while "not caring" about this election. [also remember that through several actions by mueller, the us government seized funds that entirely paid for the investigation, so technically no taxpayer dollars were spent]

* I read a lot of parroting of the maga talking points; the typical things you hear from trumps allies, or Fox News. Everything from not understanding voting machines, how elections work, mail in ballots, affidavits, etc to wild claims of mysterious voters fraud that everyone can see!

It was a peculiar set of reactions, and in some ways I truly feel for them. 4 years ago, the people who saw through trump felt similarly aggrieved, though I might argue that Russian influence seems to have been somewhat real....nevertheless, losing sucks. Especially if you are passionately for (or against) a candidate.

But that does it. The electors meet on Monday, and vote.
at December 11, 2020 No comments:

Never, ever forget this entire con, the grift, the whole grab for power was about money. Sure, he could peddle influence, and there may have been reasoning behind some of his efforts to undercut the constitution. But in the end it was still about money.

Even now, the way he suggests people help him is about putting his hand in their pocket another time (and to maybe keep it there once he leaves office).

The bigger supporters around him see it; the gravy train is ending. They're all making a last plea to sell "something" before he gets evicted.

Anyway, trump loses at every turn, including the Supreme Court. So he makes a plea for "a patriot" to help him.

Enter the AG from Texas. He files what amounts to an absurd lawsuit before the Supreme Court that Texas was harmed in voting in 4 other states because "reasons" and wants to throw out mail in ballots and vote totals in some heavily democratic districts.

Mike pence goes out to a rally and says "god bless Texas" as though his god cares what happens in politics (and isn't this the reason we abandoned the Anglican Church?)

Several other states pile on (someone referred to them as confederacy of states which seems apt) and agree that some of these voting machines and methods used for mail-in balloting are flawed. Except that in most of the states they either use the same machines or the same methods in mail-in. But they were won by trump...so it's okay there but not somewhere else?

Anyway, this is a (very) long shot, but you knew that. Otherwise why would you be here? Texas may not even have standing and can't show how they were aggrieved. And, as I've mention before "original jurisdiction" cases have to meet certain criteria, where one state is harmed in some way (typically interstate commerce) and if there is another avenue to litigate they have to go there first. This was litigated in each of the 4 states own supreme courts and that was appealed to the us Supreme Court, which dismissed it.

So what gives? Why bother? Obviously there is money at stake. Don't forget that Trump holds the purse strings to the gop funds. Many of these republi-cons sold their souls for access to that money and don't want to screw that up.

But for this Paxton guy from Texas it's deeper. He's under investigation by something called the FBI, for corruption. And yesterday, while he was glad handing with the trumpster in DC (attending a covid spreader event if you like), a subpoena was served on his office in Texas.

For him this is about more than money. This is his opportunity to do a favor for trump to keep up the illusion that the election was stolen, and keep the money rolling in. Assuming he loses in court, it also means this "deep state" got to the justices on the high court, too. Talk about a trump headline that lets him take in more cash...

And in exchange, I have no doubt that pences "god bless Texas" message was an overture of a forthcoming pardon.

This is what you voted for, people. A con man. And that is exactly what you got.
at December 11, 2020 No comments:

Its the holiday season, so we're seeing more about organizations that are setup to help others.The likes of the Ronald McDonald House spring to mind.
And I don't have anything against this program, rather I think its great.
But my question is: why? Why does it exist?  Why do we have a system that treats seriously ill children with such disregard that they have to go to what amounts to a crowdsourced program to help?
Why isn't there a better way?  We are a first world nation, and can and should be helping those in need.  It should not come down to McDonalds founding an organization that takes in contributions for its existence - and purpose of helping those who simply can't help themselves and through no fault of their own were born with some nebulous "pre-existing condition"
at December 03, 2020 No comments:

The NFL is stupid

They put some protocols in place, and worked at having a plan for covid cases.

So instead they just threw caution to the wind and are doing some really dumb things that affect the quality of the game in favor of the short term revenue to be had by just playing.

This week, they trotted out a Broncos team that had not a single QB on the roster. Can't sign anyone because that rule they enforced. Can't delay the game because..reasons! So a high school game was played. And it was dreadful.

Then the ravens had positive tests so they pushed them out as far as they could, and they took the field with some number of active players (well below the threshold they set) and the team hadn't practiced. So this one looked more like lower tier college. Again, bad football.

What a stupid mess. As I've said before, in general, for entertainment, the nfl is okay. But, you can't expect much from it, and certainly you can't root for a team. That's pointless.

So keep your crappy product, nfl.

I've spent not one dime on anything of theirs for a long time now. And this year just reminds me that was the right thing to do.
at December 03, 2020 No comments: