Last year, the NFL staged a "game" between the broncos and saints wherein the broncos had no QB on their roster for covid-related reasons.

It was an embarrassment.

And this year, the saints (in a moment if karma) had a similar problem. All of their top QBs were unavailable, but due to a rule change they were able to get a rookie QB with no experience in the NFL (and apparently no skills) to play against the dolphins.

And the results were similar. It was a embarrassment.

There was no reason for this to happen in either year; putting on these exhibitions strictly for money is just dumb.

But at least they kinda, sorta realize it's a problem.

So after the game, they "tweaked" the rule again. Test positive and you can return to the team after 5 days, without showing a negative test. As long as you say you feel okay.

See? They fixed it.

You probably won't see dumb games like that anymore. They'll be dumb in other ways.

And pro'lly you'll have more players test positive.
at December 29, 2021 No comments: 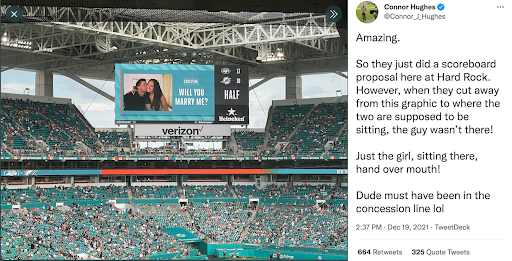 Funny by the way: “Jumbotron” was the trademark name of Sonys foray into stadium-sized screens. Essentially, they were individual tv screens arranged on a board. They have been superseded by other technologies.
Sony stopped making the Jumbotron a few years ago and officially retired the product over the last year or so.
Calling it that is really a misnomer.

...and was reminded of this ad (watch it on YouTube) Real Men Of Genius, Bud Light Mr Stadium Scoreboard Guy
at December 21, 2021 No comments:

I guess that’s one way to handle it?

The NFL has been struggling to deal with the number of positive covid tests, and resulting players deemed inactive, and therefore impacting scheduled games. And money of course.

Their answer? They pulled a page from 45s playbook. Reduce the number of tests administered, and you'll have fewer positive tests.

You hear the noise about conspiracy theories. Whether it's the moon landing, the kennedy assassination, or something more recent, there seem to always be people who believe there's a massive coverup and everyone is somehow good at keeping secrets.

And then you look at the insurrection, and hear "some people" saying that it wasn't much of anything, it was spontaneous, it was not planned.

But yet there are people looking to save their own hide, people who want to get attention, and stupid idiots who just spill the beans about everything.

It becomes obvious that what "they" were telling about its origin and what happened is a lie.

In other words, they couldn't keep something like this a secret for a few months, and not in the face of legal actions and a congressional committee.

So how in the world could a high profile conspiracy like the moon landing have possibly kept this up for over 50 years?

Surely someone would have talked. Tried to brag. Been subjected to something in their lives that would have had them open up. Had a death bed moment.

Same with the kennedy assassination. That had a bipartisan, bicameral committee asking questions. Ain't no way to keep those secrets.

Sure, there are questions and doubts about JFK, and perhaps the bow they tied it up with was a little too neat. But a vast conspiracy? Don't think so.
at December 18, 2021 No comments:

True to form, the NFL decided that money was important and bent their own rules as it relates to covid cases.

They were clear early in the season that you needed to have x number of active players on your roster in order to play. And if you didn't have enough, too bad, you would forfeit.

Predictably, cases started piling up this week. And so they simply rescheduled some games. As though it was the plan all along.

They still can't follow their own rules. It's pathetic. What a bunch of knuckleheads.
at December 17, 2021 No comments:

To me, the idea of a "religious exemption" to the covid vaccine and any sort of maski mandate is hilarious. This is a global pandemic, with a very important underpinning: the vaccine stops the spread of the virus and protects you from getting sick, and it also helps reduce the spread, as masks do. You are not only helping yourself, you are helping your community

Does not your bible teach you to love thy neighbor. Isn't the point of the son of god story to teach you about compassion, helping others, and yes, being good to yourself.

Isn't a religious exemption contrary to all of this? Isn't his idea of "personal freedom" the antithesis of thee teachings?

Man are people dumb. Sure let's make it all about you, and somehow being closer to god but not taking part in stopping the spread of a disease that has killed millions worldwide.
at December 16, 2021 No comments:

What are they trying to say? 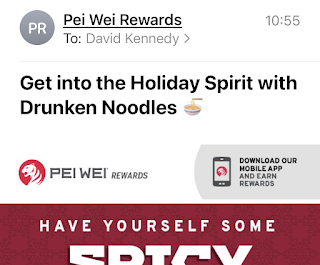 Being drunk is the holiday spirit?
at December 14, 2021 No comments:

Of course the NFL is still stupid

Antonio Brown was caught passing off a fake vaccine card. You know the thing that allows him to roam freely and come into contact with others sans mask. And not have to undergo regular testing. And do on.

And the league, which had promised to take this seriously, suspended brown (as well as a few other lesser-known players) for 3 games. Because that's serious, right?

It's a health and safety measure that they pay lip service to, and yet don't seem to care about. In some states (though not in Florida), what brown did is a felony. A crime.

But the NFL shrugs because they simply don't care - because at the end of the day the mostly old white guys do what they want.

Who cares about health and safety? But heaven forbid a guy stands up for social Justice … that guy gets blackballed.