The NFL is dumb and can’t get out of its own way. 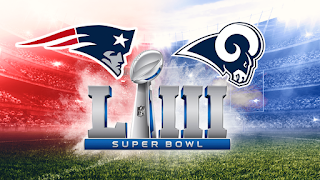 This weekends NFL games summed up my opinion about the league: it can be fun to watch for pure entertainment. But don't live and die by the outcomes and don't actively root for a team - you will always be disappointed.

Unless you're a fan of the patriots, of course. Nearly 2 decades of winning; honestly its embarrassing - for the rest of the league. New players, new coaches year after year and yet having Bellicheat and Brady is enough.

Some day, we may learn how they continue to win. Maybe there's a system of cheating or bending the rules. But maybe not. In the meantime, the one thing we know is that Bellicheat understands the rules better than anyone. He plays just to them, and gets his players to take advantage of the little things that are quirks or not well defined. And, he gets in the officials ears and as a result, they are less likely to call things on him. And rather, favor him.

Back in the 80s, the dolphins had a string of seasons where they were the least-penalized team. Shula had everything to do with that: he stayed in officials ears, kept his team disciplined, and used rules to his advantage. I think it's fair to say that they did actually commit infractions, but they were just this side of legal, and not called on plays. I see Bellicheat as Shula 2.0 in that way.

And then there's the rules themselves. On Sunday, we saw on full display how confusing it is to call almost anything. Pass interference. Roughing the passer. Holding anywhere on the field. Whether a ball was touched. Helmet to helmet hits. First downs. And what's a catch, anyway?

And there's some older guy making a determination at game speed on a call. It's silly. You have technology. It would be easy to implement some solutions to solve for some of this. Tennis can decide if a ball is in our out. Soccer can decide if it's a goal. First downs touchdowns should be simple matters.

For catches, it would seem they could come up with a simpler rule and augment the ball to decide if it's being gripped and/or hits the ground. Done and done. No decisions to be made by observation.

Helmet collisions could be monitored by devices in the helmets themselves. If there's a collision, and two helmets show a sudden impact it's contact. Penalty, and the guy making contact is ejected. No judgement calls.

You could also use it to see if a guy makes contact with players head using a hand, eliminating questions about whether he hit the helmet.

The notion that they want to make a passer interference penalty reviewable is laughable. Allowing plays to be reviewed which are or aren't penalties is going to create more chaos and not help the game.

Instead, they need to come up with a simpler rule for what constitutes interference or holding, and have a referee in a booth who can radio down if the ones on the field missed something. And they can confer with him/her much like they do on the field. And use replay in those conferences. Get it right rather than leaving it to simple judgement.

And then there's overtime. In one game the system mostly worked. Both teams touched the ball. In the other, it most certainly did not.

The rules are more-or-less the same in the regular season.

And you saw coaches opt to go for two at end game in the regular season, because the odds of getting the two are something like 60% success rate. While the coin flip is 50% that you'll get the ball and then you have to drive the field or stop the other team. Overall, there's a 55% chance if you win the coin toss you win the game.

You are better off going for the win in regulation.

In our situation, New England wins the toss and Kansas City never saw the ball.

It's not perfect but it's better than what we saw, and certainly would help generate interest.

And in the 48 hours since the game, people cite an obscure rule that allows the commissioner to replay the game, the quarter, the situation, or simply change the outcome. It's silly that this would come up - and just when would a rematch happen?

It was wrong. And silly. The fact that the nfl got it wrong just sums up the absurdity of the sport.

So as I've said before, the nfl can keep its product. I'll watch a little and enjoy the entertainment. But I am not getting too worked up about it. They love that the ratings were through the roof. They love that now there's a storyline.

I had this crazy idea to make a skating penguin for my annual holiday display.  I searched for ideas, but really couldn't find anything close to what I was looking for - either ready made, or a DIY thing that worked.

My grand plan was to have a skating rink with several penguins.  And that sort of thing just didn't exist.

After much thought, I decided to make the penguins with papier-mache, with an internal chicken wire structure.  I would then "somehow" light them....

I started with a roll of chicken wire.  I got a balloon penguin that stood at about 2 feet to use as a shape guide, and to help me best determine how it would look in 3 dimensional space.  Since the wire was about 2 feet wide, I needed to cut enough to make it get the full effect. 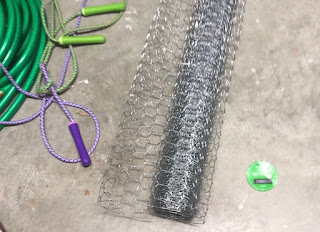 So I cut off about 3 feet and set about bending, shaping, and folding.  I now had a rough penguin shape that would serve as my base. 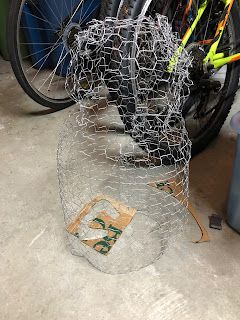 Since he was going to be standing on skates, and standing upright, I needed to create a way to help him stand solidly.  So I came up with a PVC pipe skeleton.  It provides that structural support and allows for an easy way to attach the wings, which were going to be a cardboard.  Also the skates could easily be attached to the frame giving the illusion of the penguin standing.

I have a second one more complete in the background of the photo. 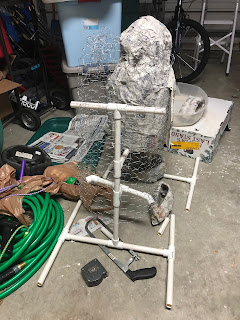 Skates were another matter.  They needed to be constructed somehow.  I thought about more chicken wire, but decided that it was easier to cut and shape some foam tubing I had leftover from another project.  I made them shoe-shaped and added a blade out of cardboard. 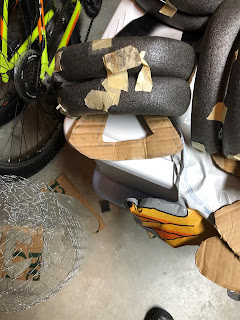 Then it was time for papier-mache.  I first inserted a piece of the foam tubing at beak height, and then proceeded to do the flour-water-newspaper process.

I did some re-shaping as I sent along, as I wanted it to look "right."  I covered the skates as well.

I used a screw through the pvc at wing-height to attach the cardboard wing, and put the mache all around it to both hold and cover it. 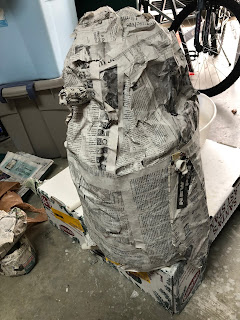 Once covered, it looked like this.  Hey! Its nearly a penguin! 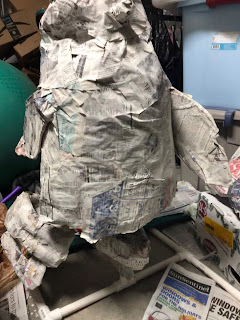 Alright, now it was time to consider how to light it.  I realized that LED lights produce very little heat, and could be affixed to the surface without worrying about whether it might be a fire hazard.

One thought I had along the way was to put lights on the cage before the mache, but I wasn't sure how that would come out.  So instead, I wrapped the entire structure in an LED strand of lights.  I selected a bright white light.

I also wanted to be sure the eyes would work.  For those, I decided to put part of the strand inside the structure, and poke them out.  Then I would put a plastic lens on top to complete the eye.

Two things I did to improve the effect.  The first was to build up what amounts to an eye socket that would give enough room to have the bulb and keep the lens in place.  The second was to color the bulb. From a quick search, I learned a very simple and very effective technique: use a sharpie. 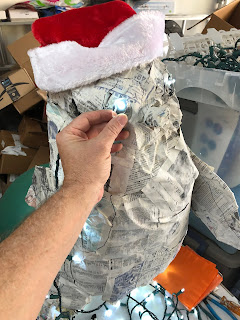 Next up was to put a top cover to make it look like a penguin.  For this, I decided on tissue paper and crepe paper.  Again, I used the papier-mache technique, but added glue to the mx to give it a little rigidity and to further protect against the potential for heat to simply burn the paper.

For the skates, I used tin foil to give them the look of metal. 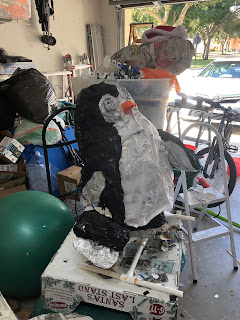 And voila.  I have what looks like a skating penguin.  Now lets turn the lights on and see how he looks. 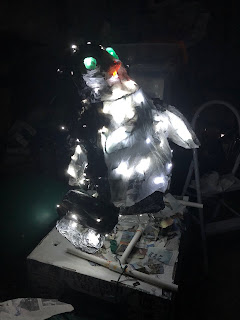 I like it.  I think it will be fine as an outdoor display that will still be supervised.  I don't want to have a problem.

One last thing I did was to coat it with a clear water repellent.

And later, I'll also put it under a canopy to keep it dry.

But there you go.  Skating penguin!