Tua Tagovailoa Concussion - what happens next?

I'm no expert when it comes to concussions, but in looking at the chart the concussion doctor presents, ya gotta wonder if Tua should play again this year.
Good that the team has ruled him out this week. But he wants to play and says he feels good. The coach wants to put his best players on the field. And the doctors may clear him.
And sure, he’s an adult and being well compensated for putting himself at risk. But it still doesn’t seem right.
Maybe he gets lucky and doesn’t suffer another concussion. Then again, maybe he does and it affects the rest of his life.
Oh and just one point I wanted to make about all this conversation: I’ve heard people say that “some doctor who is watching on tv shouldn’t weigh in on it because he’s not there.”
Except that the concussion doctor who the nfl consults (you know the one the nflpa fired last week?) stays in one location and watches video to make his judgement call. The only thing he has that other observer/doctors (like in this video) don’t is the team doctor on the phone to answer a few additional questions….though these questions are often answered in other ways.
So I would say their opinion is valid.

This is what it’s all about

Succinct. But right on point. Stop making it everything a political statement. 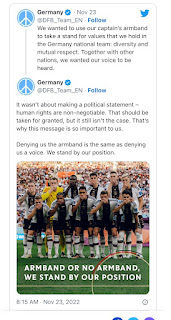