The notion of NFTs makes me chuckle 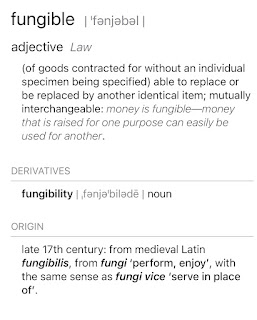 It's maybe a little like painted art works in that the one-of-a-kind masterpiece has value because someone (or many someone's) like it and say it has value.

But it's not at all like painted art in that you can't hang it in a wall, you can't see the brush strokes, you can't interpret the artists mood, and so on. It's clip art. 2 dimensional media that exists only on a computer. And that is just pixels with no true creativity. These aren't "artists" making them in a traditional sense.

Both are subject to copies being made of course. But honestly with digital media it's nearly impossible to spot a forgery. With physical art there are ways for a forgery to be spotted.

So an NFT may be have copies that look the same. The only difference is in the digital footprint. But those can be faked too. Still…That original is worth a lot…because someone said it was.

And that brings me around to thinking about photography. Old school photography used film. That was exposed to light and then could be developed to get a negative image and then that was printed onto paper.

There was this thing that was popularized in movies: someone would get blackmailed and would insist on payment to get the negatives and all prints. The meaning was that the person with the film had "the originals" and that way no one else could ever see them.

It's laughable because it wasn't that hard to duplicate the negatives and the person may have printed 100 photos, but said they only printed 50 and gives you those.

That's exactly the same problem as the NFTs. You are getting "the original" and if you believe it then you're the sucker. Someone essentially blackmailed you for the negatives.
at June 03, 2022